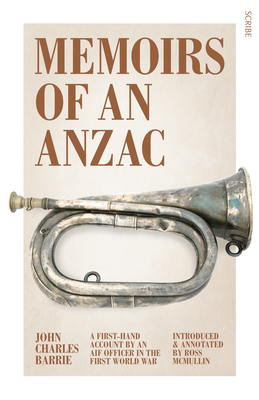 Memoirs of an Anzac

Against his mother's wishes, John Charles Barrie joined the Australian army in 1909. Five years later, he was on his way to Egypt as an officer with the Australian Imperial Force. He survived the war to write his memoirs, which were kept by his family for 80 years.

Made public for the first time, this book gives first-hand accounts of Barrie's wounding at Gallipoli on that fateful first Anzac Day, his recuperation in England, and the friendships he made there. It chronicles his escape from rehab so that he could return to the war in France, and his fighting for days on end, waist-deep in mud in the trenches.

Memoirs of an Anzac tells of the horrors of war, but it is also lightened with the good humour that resulted from thousands of young Australian men being thrown together in dire circumstances. This is not a history textbook, nor is it a series of diary notes and letters--it is a gut-wrenching, heart-warming true story that will move you.

Born in 1883, John Charles Barrie grew up in Victoria. He joined Australia's militia in 1909, and remained an army man his entire life, retiring with the rank of colonel. An officer in the AIF from the start of World War I, Barrie was involved in the landing at Gallipoli, and later served at the Western Front. He was wounded twice during the war. Barrie died in 1957, survived by his wife and daughter. His memoirs have been made available by his granddaughter, Judy Osborne. Ross McMullin is a historian and biographer who has written extensively about the impact on Australia of its involvement in World War I. Dr McMullin's books include his biographies, the award-winning Pompey Elliott and Will Dyson: Australia's radical genius. His most recent book, Farewell, Dear People: biographies of Australia's lost generation, was awarded the Prime Minister's Prize for Australian History.
Loading...
or support indie stores by buying on