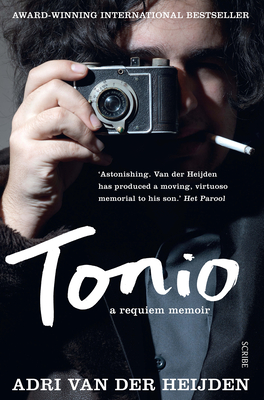 Winner of the 2012 Libris Literature Prize -- the Dutch equivalent of the Booker Prize -- and a bestseller in Holland and Germany, this is a mesmerising rendition of grief and love.

On Pentecost 2010, Tonio -- the only son of writer Adri van der Heijden -- is hit by a car. He dies of his injuries that same day. Tonio is only 21. His parents are faced with the monstrous task of forging ahead with their lives in the knowledge that their only child will never again come home, never again stop by just to catch up, never again go out shopping with his mother and bitch about passers-by, never again ask his father: 'Did you work well today?' Never again.

Adri van der Heijden is driven by two compelling questions: what happened to Tonio during the final days and hours before the accident, and how could this accident happen? This search takes in various eyewitnesses, friends, police officers, doctors, and the mysterious Jenny -- who turns out to have played a crucial role in Tonio's life during those final weeks.

Jonathan Reeder, a native of New York and longtime resident of Amsterdam, enjoys a dual career as a literary translator and performing musician. Alongside his work as a professional bassoonist, he translates opera libretti and essays on classical music, as well as contemporary Dutch fiction. Adri van der Heijden (b. 1951) is one of Holland's greatest and most highly awarded authors. His oeuvre consists mainly of two sagas: The Toothless Time and Homo Duplex.
Loading...
or
Not Currently Available for Direct Purchase