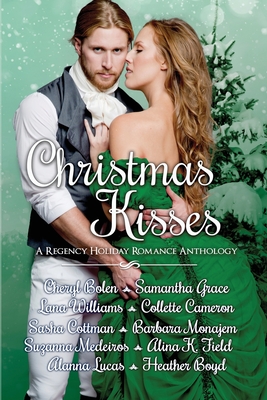 Heat up the holiday with ten new dreamy regency rogues Winter is a time of magic, promise, and unexpected romance. Anything could happen...and it all begins with Christmas Kisses.

The Wallflower's Christmas Wish (Brides of Bath) by Cheryl Bolen: While painting the portrait of Sir Elvin Steffington, Bath's most eligible bachelor, the exceedingly plain spinster Diana Furness develops a strong friendship with her subject. Could this be more than friendship? Could he ever be attracted to one as inconsequential as she?

A Kiss From a Captain (An Everly Manor Happily Ever After) by Samantha Grace: Captain Gabriel Brazier defied doctors' predictions and learned to walk again after losing his leg in war. But the damning voice whispering no woman will find him desirable again is hard to ignore, especially when he arrives at Everly Manor to compete for the charming Lady Laurel's heart.

A Rogue's Christmas Kiss (The Rogue Chronicles) by Lana Williams: Mary is shaken by a letter requesting she return home for Christmas. But her world is truly upended when she reunites with a former love for the long journey. Arthur has no desire to rekindle their relationship after Mary broke his heart, but a snowstorm and some passionate kisses just might reignite their love.

'Twas the Rogue Before Christmas (The Honorable Rogues(R)) by Collette Cameron: Eager to leave England, American, Jason Steele can't forget the beautiful noblewoman he saved from a foiled robbery. Determined to behave properly, Lenora Audsley can't stop thinking about the rogue who rescued her. Can the magic of the holiday season unite these lovers who are forbidden to see each other?

Bound to the Belgian Count (London Lords) by Sasha Cottman: Abandoned bride, Lily is determined to seek an annulment. But when her absent husband Count Maximilian de Viron suddenly appears in court, the judge decides on a unique compromise. Between now and Christmas Eve, the couple must live together, share meals, and talk.

Embracing the Scandal by Barbara Monajem: Harriet is banished for her naughty behavior, and when Jonathan asks for her hand, he is told she is dead. When they meet again, can they overcome the lies and sins of the past to fall in love once again?

A Viscount for Christmas by Suzanna Medeiros: Viscount Thornton returns home for his mother's annual Christmas party to find a beautiful woman sleeping in his bed. Neither he nor Celia are happy when her mother demands they wed. Can they escape marriage or will they both get the Christmas gift they didn't know they wanted?

The Impetuous Heiress (The Upstart Christmas Brides) by Alina K. Field: Before dashing Lord Loughton can make amends with his neglected fianc e, the lady's meddling cousin delivers her to his doorstep. He soon realizes more is amiss than his carelessness. Can he uncover her secrets and win her back before he loses her altogether?

A Duchess for Christmas (Forgotten Heiress) by Alanna Lucas: Grace Banks is looking forward to her first Christmas at the Home for Desolate Ladies, but Edward, Duke of Tavistock, is set upon ruining it, and the secrets keeping them apart leave little hope for reconciliation. Can the spirit of Christmas heal two wounded hearts?

Let it Snow by Heather Boyd: When the worst scoundrel in her acquaintance rescues Yvette from a winter storm, she fears a holiday spent dodging his attempts at seduction. But more than one yuletide surprise awaits as she discovers Luc is a man of surprising patience, and passion for just one woman...Yvette herself.