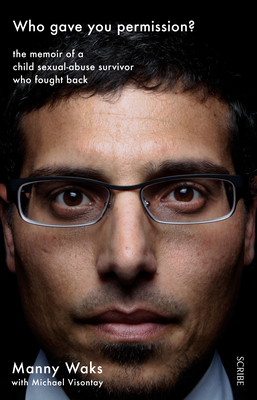 Who Gave You Permission?

The Memoir of a Child Sexual-Abuse Survivor Who Fought Back

A searingly honest, no-holds-barred memoir about a man who shattered the silence about institutionalized child sexual abuse.

Manny Waks was raised in an ultra-Orthodox Jewish family, the second oldest of seventeen children. As an adolescent, he was sexually abused at his religious school. Betrayed by those he trusted, Waks rebelled against his way of life, though he later went on to become a prominent Jewish community leader.

In mid-2011, Waks went public about his experiences, seeking to bring justice to the abusers and those who covered up their crimes. For his courage in speaking out, Manny and his family were intimidated and shunned by their community, and he was forced to leave Australia.

Nevertheless, Waks continues to advocate for survivors and to hold those in power to account. His pursuit of perpetrators led him to Crown Heights in Brooklyn and to Los Angeles, where he tracked down one of the Australian abusers and alerted the local Jewish communities to the international dimensions of the child sexual abuse problem.

Back in Australia, Waks was eventually vindicated by a royal commission into institutional child sexual abuse, and many of his attackers lost their positions of power and influence.

This is the story of a man who shattered a powerful code of silence, the battles he has fought, the vindication he has earned, and the extraordinary toll it has taken on his personal life and that of his loved ones.

Manny Waks was born in Israel but raised mostly in Melbourne, Australia. He was born into a Chabad (ultra-Orthodox Jewish) family, and is the second oldest of 17 siblings. At the age of 18 Manny returned to Israel where he voluntarily served in the Israel Defense Forces. He subsequently returned to Australia and obtained a degree in International Relations. He is the founder of Tzedek, an Australian-based support and advocacy group for Jewish victims/survivors of child sexual abuse, and Kol v'Oz, a global organization with the goal of preventing sexual abuse within the global Jewish community. He resides in Israel. Michael Visontay has worked for over 30 years as a journalist, author, and lecturer. A former assistant editor of the Sydney Morning Herald, he has ghost-written four books of memoir, including The Happiest Refugee and Undies to Equities: the remarkable life of Henri Aram.
Loading...
or support indie stores by buying on