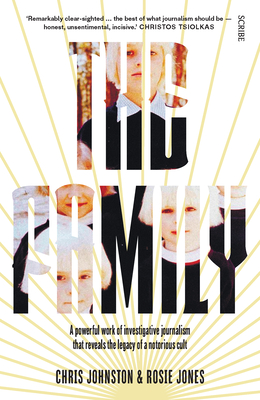 The Shocking True Story of a Notorious Cult

A powerful work of investigative journalism about a notorious cult based in Melbourne, Australia, that captured world-wide headlines.

The apocalyptic group The Family and their guru, Anne Hamilton-Byrne, captured international headlines throughout the 1980s and 1990s. Starting in Melbourne, Australia, their tentacles spread to Britain, Upstate New York, and Hawaii.

Hamilton-Byrne, who told some followers she was Jesus Christ returned in disguise, was glamorous and charismatic--and dangerous. She stole children through adoption scams and imprisoned them, bleaching their hair blonde to make them look like siblings and raising them as her own. In 1987, police swooped on The Family's lakeside compound and rescued children who claimed they were part of Anne's future master race, recounting terrible stories of near-starvation, emotional manipulation, and physical abuse. But Anne could not be found, sparking an international police hunt. After an extensive search, the FBI captured her in the Catskills, and helped bring her to trial.

How did such a notorious group come to flourish? How did Anne maintain a hold over her followers? The Family tells the strange and shocking story of one of the most bizarre cults in modern history.

Chris Johnston: Chris Johnston is a senior writer for The Age and Sydney Morning Herald, based in Melbourne. He has been covering developments related to The Family for several years.Rosie Jones: Rosie Jones is an award-winning writer, director, and editor. Her most recent credits include the feature documentary The Triangle Wars (Best Australian Documentary, Antenna Documentary Festival 2011), Westall '66: a suburban UFO mystery and Obsessed with Walking, about the Booker-nominated writer Will Self. She has edited numerous documentaries, including James Cameron's feature documentary, DeepSea Challenge 3D, and the multi-awarded short docs Queen of the Desert and My Brother Vinnie.
Loading...
or
Not Currently Available for Direct Purchase