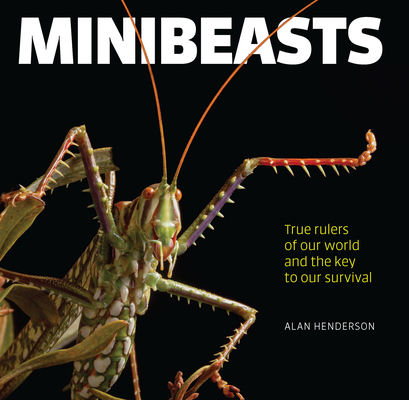 True rulers of our world and the key to our survival

This stunning insight into the micro world of the minibeasts reveals the critical roles they play in our past, present and future survival. These true rulers of our world are complex, highly advanced creatures which are integral to our ecology. Simply put, without the invertebrates (insects) and other tiny critters, humans would not survive.

While outlining the importance of the minibeast world, this book is also a visual feast of detail and colour, capturing form and behaviour that the naked eye isn’t able to see when encountering these small creatures. The result is a book that captivates the reader while inspiring a new appreciation for these magnificent animals.

Each chapter focuses on a specific aspect of minibeasts and includes introductory text, images and informative captions. Topics covered include the jobs minibeasts perform that enable species’ to exist, and the ways in which they have evolved to suit their environments. From medical drugs to hi-tech robotics, minibeasts provide a wealth of material for humans to draw on to help solve our 21st-century problems. We borrow ideas from them in the fields of biotechnology, engineering and design, and they are essential to our continued evolution.

Lavishly illustrated with breath-taking macro photography, the awe-inspiring lives and physiologies of minibeasts are presented in an engaging, fascinating take on life on earth.

Alan Henderson has had a fascination for invertebrates his entire life. He has successfully combined this with his other passion, macro photography, and his images have been published in books and other media throughout the world.

Alan studied Scientific Photography at the Royal Melbourne Institute of Technology before beginning his zoo-keeping career in Ballarat. He created the Australian Nature Education Centre in 1995 and received the Young Australian of the Year Regional Development Award for the Centre. He was lured to Melbourne Museum and began the Live Exhibits Unit, which ultimately led to the development of the extremely popular ‘Bugs Alive!’ exhibition. He then authored the award-winning book Bugs Alive – A Guide to Keeping Australian Invertebrates. He coordinated the Unit for 11 years before leaving to operate Minibeast Wildlife full-time.

Alan’s expertise in working with live invertebrates have taken him around the world, including the jungles of Costa Rica. Alan now operates Minibeast Wildlife from the tropical paradise of Kuranda, north Queensland, one of the most biologically diverse regions of Australia, particularly with regard to invertebrates.