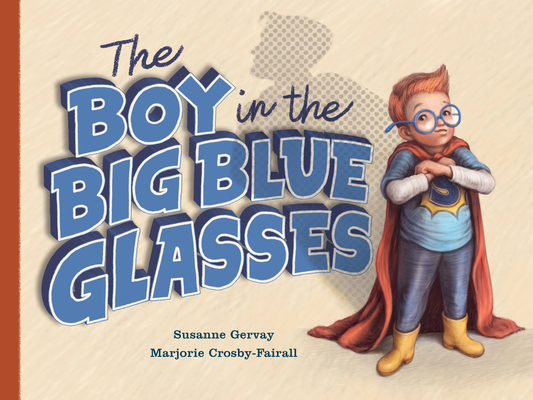 The Boy in the Big Blue Glasses

When Sam gets his first pair of glasses, he feels like no one knows who he is anymore. His parents say he looks handsome in them and his grandpa thinks he must be a superhero, but Sam just wants to be himself. Even at school, everyone except his best friend George seems to have forgotten who he is. How will Sam make the world see him again?

Follow Sam as he tries to remind people who he is, abandons his glasses at every chance he gets, and even faces giant penguins and googly-eyed turtles in his journey back to his old self. Young readers will delight in the vibrant illustrations and Sam’s imaginative antics, from building pirate ships with George to fending off sharks as captain on the high seas. And the more he returns to his adventurous ways, and rediscovers his confidence and sense of humour, the more people see him not as some anonymous handsome superhero, but as Sam.

The Boy in the Big Blue Glasses is an action-packed story about overcoming your fears of other people’s perceptions and not shying away from being yourself. Any children dealing with new glasses or other changes in their appearance will find inspiration in Sam’s bravery. After all, how big or blue your glasses are doesn’t make any difference when you’re captain of a pirate ship!

Susanne Gervay is an award-winning Australian author, educational consultant and children’s book advisor who has published 15 previous children’s book titles as well as anthologies. She is recognized for her youth literature on social justice with her I am Jack series focusing on school bullying. Among other awards, Susanne has received the Lifetime Social Justice Literature Award for Children’s Literature from the International Literacy Association and the Order of Australia. She is the Regional Advisor for SCBWI Australia East & New Zealand. Her books are endorsed by Room to Read, Cancer Council, Alannah & Madeline Foundation, Variety, Life Education, and anti-bullying organizations.

Marjorie Crosby-Fairall is a designer and freelance illustrator of 7 previous children’s books. A dual citizen of Australia and the USA, Marjorie was raised on a farm in California with a menagerie of rescued animals. She devoured picture books as a child, examining the detail of their illustrations. Her books have appeared on the Premier’s Reading Challenge lists, and she won the CBCA Eve Pownall Award for her first picture book.