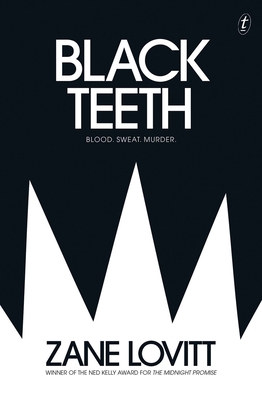 Jason Ginaff doesn't get out much. Partly because of the anxiety, mainly because he works at home, researching people on the internet--job candidates doing party drugs on Instagram accounts they thought they'd deleted; the prospective new head of sales stripping for a ladies' night . . .

He's been searching for something on his own time, too. Now he's found it: the phone number of the man he believes to be his father. Which is how he gets mixed up with Rudy Alamein--they've been looking for the same man. The difference being, Rudy wants to kill him.

Black Teeth is a witty, dynamic contemporary thriller by an emerging master of the form. It's both a literary triumph and an irresistible read.

Zane Lovitt's debut novel, The Midnight Promise, won Australia's Ned Kelly Award for Best First Fiction, and led to Lovitt being named a Sydney Morning Herald Best Young Novelist of 2013. It received a starred review in Publishers Weekly and was recommended by Booklist for fans of international crime fiction. Lovitt's stories have been featured in Ellery Queen Mystery Magazine.

Zane Lovitt was a documentary filmmaker before turning his hand to crime fiction. His debut novel, The Midnight Promise, won the Ned Kelly Award for Best First Fiction, and led to Zane being named one of the Best Young Novelists of 2013 by the Sydney Morning Herald. Lovitt's stories have been featured in the Ellery Queen Mystery Magazine. Zane Lovitt lives in Melbourne.
Loading...
or
Not Currently Available for Direct Purchase