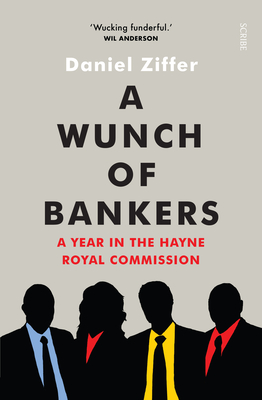 A Wunch of Bankers

A Year in the Hayne Royal Commission

It was a complicated, galling, and gasp-inducing year at the Royal Commission into Misconduct in the Banking, Superannuation and Financial Services Industry.

It wasn't just the long list of scandals exposed to a horrified nation--charging fees to dead people, ignoring blatant conflicts of interest, and taking $1 billion from customers in fees that banks were never entitled to.

What made it so fascinating, so heart-breaking, and so enraging was the procession of faces through the witness box, and the team of counsel gazing into the dark heart of banking.

Tearful victims, blank-faced executives, hapless regulators, and a couple of utter charlatans all had their day in court, watched by an audience of millions, and revealing--in their stories--the material to justify re-shaping the multi-trillion dollar financial-services industry that forms a pillar of Australian life.

A Wunch of Bankers covers not just the big shocks, but the small moments--lost in the flurry of daily reporting--that reveal how companies have used the law, limp enforcement, and basic human behavior to take advantage of customers.

Is there a phrase that allows life-insurance spruikers in call centers to terrify you about your impending death--and the grief-stricken ruins of an estate you'll leave for your bereaved family--while still being legal? Yes, there is.

Was there a meeting in which a bank's executives ignored a warning of 'Extreme' from its chief risk officer, to embark on a dodgy scheme that accrued $3.6 billion in funds? There was.

In A Wunch of Bankers, the World's Oldest Debuting TV Reporter brings out the color and grit of the royal commission's proceedings, and explores broader issues raised by the testimony. A compelling mixture of analysis, reportage, and observation, it is a revelatory work.