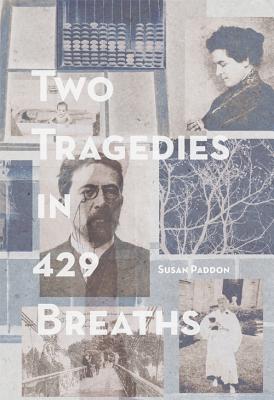 Chekhov's work and life fuse with a daughter's caring for her dying mother in this powerful debut.

Two Tragedies in 429 Breaths is a book-length series of poems written from the perspective of a daughter who reads Chekhov obsessively while spending a spring and summer caring for her mother, who is dying from pulmonary fibrosis. Through the prism of the relationships in Chekhov's work and life emerges an honest, intimate, and even occasionally humorous portrayal of the energy we put into each other's lives during times of deterioration and suffering. A prismatic, memorable debut


If it were up to me, I'd prefer to talk today. To ask
my mother questions, finish half-told stories.
- from Yellow.

Susan Paddon was born and grew up in St. Thomas, Ontario, attended McGill and Concordia Universities in Montreal, and lived overseas in Paris and London before settling in Margaree, Nova Scotia. Her poems have appeared in Arc, CV2, The Antigonish Review and Geist.
Loading...
or
Not Currently Available for Direct Purchase