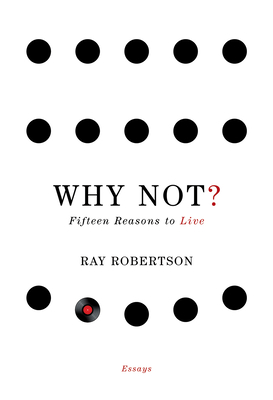 Featured on The Hour with George Stroumboulopoulos. SHORTLISTED FOR THE $60,000 HILARY WESTON WRITERS' TRUST PRIZE FOR NONFICTION Longlisted for the $25,000 Charles Taylor Prize for Literary Non-Fiction. "Clear-eyed ... Robertson is no stranger to confronting unsavoury truths."--Steven Beattie, That Shakespearean Rag "Many of us sense that the world has too many moving parts and can become utterly defeated. Ray Robertson found a 'road back' in this splendid and intriguing book." --Jim Harrison Shortly after completing his sixth novel, Ray Robertson suffered a depression of suicidal intensity. Soon after his recover, he decided to try and answer two of the biggest questions we can ask. What makes humans happy? And what makes a life worth living? His answers aren't what you might expect from a mental illness memoir--but they're exactly what you'd expect from Ray Robertson. With the vitality of Nick Hornby and a brashness all his own, Robertson runs his hands over life, death, intoxication, and art. Unashamedly working-class and unabashedly literary, Why Not? is a rolling, rocking, anti-Sisyphean odyssey. Ray Robertson is the celebrated author of eight books and six novels, including What Happened Later, about Jack Kerouac's last years. He lives and writes in Toronto, Ontario.

Ray Robertson: Ray Robertson is the author of the novels Home Movies, Heroes, Moody Food, Gently Down the Stream, What Happened Later and David, as well as a collection of non-fiction, Mental Hygiene: Essays on Writers and Writing.

Praise For Why Not?: Fifteen Reasons to Live…

"Both playful and profound, laced with insight from thinkers across a range of disciplines, from music to history, politics to literature, high to low culture."National Post

"strong heartfelt, funny, rigorous, practical without ever being preachy...a book that feels like a friend."Montreal Gazette

"Thoughtful meditations on the big questions of life (and death) ... Readers will not doubt their authenticity."The Globe and Mail

Ray Robertson's Why Not? is first among the "five Canadian books you may not necessarily hear much about," but which "should be on reading radars everywhere." The Globe and Mail

"The real star of Moody Food is the writing, with its displays of sharp humor and deep love of music." Litkicks.com

Clever, word-drunk, and falling-down funny... Robertson is a moral writer and a bitingly intelligent one, a man who writes with penetrating insight of what needs to be written about: beauty, truth and goodness.” Globe and Mail