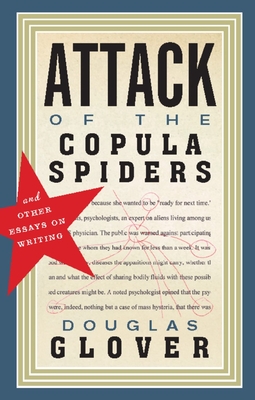 Attack of the Copula Spiders

A GLOBE & MAIL BEST BOOK OF THE YEAR FOR 2012 "Glover is a master of narrative structure."
--Wall Street Journal In the tradition of E.M. Forster, John Gardner, and James Wood, Douglas Glover has produced a book on writing at once erudite, anecdotal, instructive, and amusing. Attack of the Copula Spiders represents the accumulated wisdom of a remarkable literary career: novelist, short story writer, essayist, teacher and mentor, Glover has for decades been asking the vital questions. How does the way we read influence the way we write? What do craft books fail to teach aspiring writers about theme, about plot and subplot, about constructing point of view? How can we maintain drama on the level of the sentence--and explain drama in the sentences of others? What is the relationship of form and art? How do you make words live?
Whether his subject is Alice Munro, Cervantes, or the creative writing classroom, Glover's take is frank and fresh, demonstrating again and again that graceful writers must first be strong readers. This collection is a call-to-arms for all lovers of English, and Attack of the Copula Spiders our best defense against the assaults of a post-literate age. Douglas Glover is the award-winning author of five story collections, four novels, and two works of non-fiction. He is currently on the faculty of the Vermont College of Fine Arts MFA in Writing program. Praise for Douglas Glover A master of narrative structure. - Darin Strauss, author of Half a Life, Wall Street Journal So sharp, so evocative, that the reader sees well beyond the tissue of words into ... the author's poetic grace. - The New Yorker Glover invents his own assembly of critical approaches and theories that is eclectic, personal, scholarly, and smart ... a direction for future literary criticism to take. - The Denver Quarterly A ribald, raunchy wit with a talent for searing self-investigation. - The Globe and Mail Knotty, intelligent, often raucously funny. - Maclean's Passionately intricate. - The Chicago Tribune Darkly humorous, simultaneously restless and relentless. - Kirkus Reviews


Praise For Attack of the Copula Spiders: Essays on Writing…

"For the budding writer, Attack of the Copula Spiders offers an excellent primer on the basics; the practiced writer will glean so much more from Glover’s wonderful literary experience."The Los Angeles Review of Books

"Douglas Glover, the award-winning Canadian writer of fiction, short stories and essays carries within him a huge sense of duty both to the craft of writing and to the language ... I stand before it in awe ... This is a book for all writers and for any creative writing class syllabus." Telegraph-Journal

Douglas Glover: Douglas Glover (1948-) is the award-winning Canadian author of five story collections, four novels (including Elle), and two works of non-fiction. In 2003 he won the Governor-General's Award for Fiction; in 2005 he was shortlisted for the International IMPAC Dublin Literary Award; in 2006 he won the Writers' Trust of Canada Timothy Findley Award. His critically acclaimed novel The Life and Times of Captain N. was listed by the Chicago Tribune as one of the best books of 1993 and as a Globe & Mail top-ten paperback of 2001. He was recently the subject of a TV documentary in a series called The Writing Life and a collection of critical essays, The Art of Desire, The Fiction of Douglas Glover, edited by Bruce Stone. And he appeared in several segments of the TV series Writers' Confessions. Since he washed up in the hinterlands of upstate New York in the early 1990s, Glover has taught at Skidmore College, Colgate University, Davidson College, and the State University of New York at Albany. In addition, he has been writer-in-residence at the University of New Brunswick, the University of Lethbridge, St. Thomas University and Utah State University. He is currently on the faculty of the Vermont College of Fine Arts MFA in Writing program.
Loading...
or support indie stores by buying on