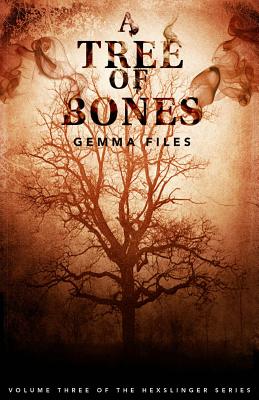 A Tree of Bones

Volume Three of the Hexslinger Series

New Mexico, 1867: Months have passed since hexslinger Chess Pargeter sacrificed himself to restore the town of Bewelcome, once cursed to salt by his former lover, "Reverend" Asher Rook. Now a coalition led by Allan Pinkerton's Detective Agency lays siege to reborn Mayan goddess Ixchel's notorious "Hex City," the one place on earth where hexes can act in consort, and the desert just outside Bewelcome has become the front line in what threatens to become a new Civil War--one in which wild magic and black science clash headlong, producing carnage like nothing the world has ever seen.

Though reinstated with the Agency, Pinkerton-turned-outlaw Ed Morrow finds himself caught between factions, as Aztec trickster god Tezcatlipoca roams the battlefield wearing Chess's face and body, promising aid while sowing dissent. Further into the wasteland, spiritualist Yancey Kloves and her allies struggle to stop an ever-widening, monster-spewing crack from breaching the wall between worlds, while Ixchel ruthlessly exploits the hexes gathered around her in order to resurrect the rest of her dead pantheon, kicking off an Apocalypse fed by shed human blood.

And in Hex City's darkness, "Reverend" Rook--Ixchel's consort, her key supporter up 'til now--plots a final, redemptive treachery of his own.

As ever, these gory, perverse, and world-wrenching schemes all hinge on "dead" Chess Pargeter's participation, though the man himself is currently trapped in an underworld dimension based on London's notorious Seven Dials slum, with only his oldest enemy--his similarly deceased mother, "English" Oona--for company. But Chess has fought his way out of hell before . . . .

This is the third and final installment in the Hexslinger Trilogy.

Gemma Files is the winner of the International Horror Guild Award and the Black Quill Award. She has been nominated for the Lambda, the Stoker and the Shirley Jackson Awards.
Loading...
or
Not Currently Available for Direct Purchase