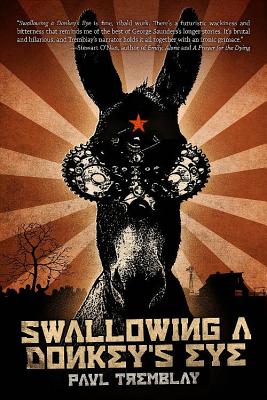 Farm is the mega-conglomerate food supplier for City, populated with rabidly bureaucratic superiors, and sexually deviant tour guides dressed in chicken and duck suits. City is sprawling, technocratic, and rests hundreds of feet above the coastline on the creaking shoulders of a giant wooden pier. When the narrator's single mother, whom he left behind in City, falls out of contact, he fears the worst: his mother is homeless and subsequently to be deported under City to the Pier. On his desperate search to find his mother, he encounters ecoterrorists wearing plush animal suits, City's all-powerful Mayor who is infatuated with magic refrigerators and outlaw campaigns, and an over-sexed priest who may or may not have ESP, but who is most certainly his deadbeat dad.

Whether rebelling against regimented and ridiculous Farm life, exploring the consumer-obsessed world of City, experiencing the suffering of the homeless in Pier, or confronting the secrets of his own childhood, Swallowing a Donkey's Eye's narrator is a hilarious, neurotic, and rage-filled Quixote searching for his mother, his own dignity, and the meaning of humanity.

Paul Tremblay is the author of the novels The Little Sleep, No Sleep Till Wonderland, and Swallowing a Donkey's Eye, and the short story collections Compositions for the Young and Old and In the Mean Time. He has published two novellas, and his essays and short fiction have appeared in the Los Angeles Times, Five Chapters.com, and Best American Fantasy 3. He is the co-editor of four anthologies including Creatures: Thirty Years of Monster Stories (with John Langan).
Loading...
or
Not Currently Available for Direct Purchase