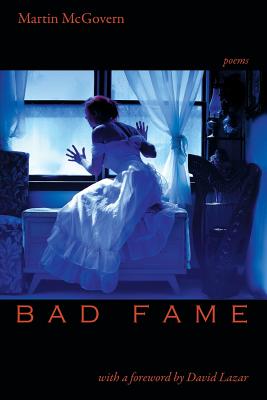 Poetry. Martin McGovern's BAD FAME muses on the perplexities and certainties of the human condition, often in soaring eulogies and searing elegies: as in The Circle of Late Afternoon which asks, Isn't there an art to giving myself away slowly like wheat opening to the sun?; or, Processionalia, where a bee / abandons the tea roses / and circle that black blossom of / the widow's veiled face as if her tears were / pollen and the bee could feather / its legs with grief. Be it lore set in Colorado, or farther out, the personal and regional tributes unravel the universally familiar and pertinent. McGovern's debut collection is the work of a seasoned master in command of craft and themes.

There is an unforsaken paradise in these pages, and a lot of ungodly anxiety... Like Dubliners, BAD FAME darkens, deepens, darkens through its sections, understanding with Joyce the tidal pull of place that will never let us survive if we resist the current... the blue snow, not of Dublin, but of memory, of Colorado... this extraordinarily unique McGovern flair for the Keatonish (Buster) aside mixed with lyrical intellection, these poetic rooms with their many blue lights, direct or indirect, for us to turn on as night comes on.--David Lazar, from the Foreword

Here are exacting sentences, any number irregularly hugged into the ferocious clusters which are Mr. McGovern's poems. My likely favorite, 'If the Light Could Kill Us, ' does heavy duty as a garden unfurled at dawn, the beloved 'still sleeping, / flame-pink welts our love leaves on your almost / too delicate skin, brazen in this light.' And then the assault of a very different sentence, 'Samuel Johnson is dead. And Mrs. Thrale. / And the kind cherub of a straitjacket / she kept closeted should reason fail / him thoroughly, where's that deck-coat now?' followed by other people's torments inspected so closely that this morning 'violence / lingers like the last touch of a season.' Hence: 'Only as I rise to pull the window's shade / do you wake, dusted and dazed, as from a fever.' Strong as they are, the sentences, like the centuries, are treated pitilessly, as you can hear, yet there is what the poet calls 'the shimmer of a teen movie' throughout. Resilient art, and no loitering.--Richard Howard.