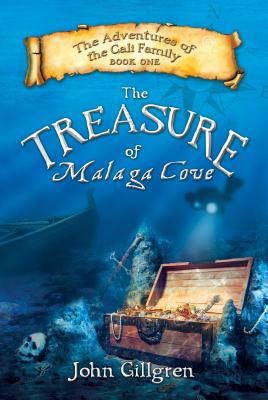 The Treasure of Malaga Cove

Join Sir Francis Drake on his flagship the Golden Hind in 1577 as he searches for a shorter route to Asia. On his dangerous journey around the tip of South America and up the west coast of the Americas, his crew faces violent storms at sea and battles with Spanish and Portuguese Men-O-War. Finally, Drake must deal with a mutiny on his own flag ship. Four hundred years later, Carmine Cali is learning to dive off the coast of southern California when his partner Nelson Bartlett swears he sees a skull hidden in the grasses off Malaga Cove. Another dive that day reveals nothing. Carmine spends the next 39 years trying to confirm that the skulls exists. Follow Carmine, his wife Elaine, and their children Snail, Carmen and Caroline in their diving adventures and search for the enigmatic skull.

Born in California at the end of World War II, John lived there until his father was transferred to Japan where he graduated from high school. He graduated from Nile C. Kinnick (YO-HI) where he excelled in track and field. He served with the US Army Special Forces for 13 years, then joined the US Department of State and served another 14 years. He has traveled to over a 100 countries. He is a graduate of George Mason University with a BS Degree in Education and has a Master’s Degree from the University of Leicester, UK. John is married to Joyce and they have 5 children. He and his wife are now retired and living in northern Florida.
Loading...
or
Not Currently Available for Direct Purchase