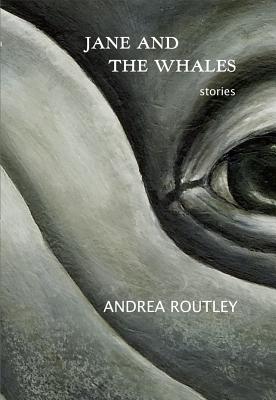 Jane and the Whales (Paperback)

In this poignant debut collection, Andrea Routley muddies the line between the physical and emotional worlds: reality becomes not simply what is in front of us, but a mutable, fragile place in the imagination.

On the verge of divorce, and in a pot-induced haze, Tom Douglas prepares to roast a pork shank in his new—and contentious—Authentic Italian Brick Oven, but some surprise visitors threaten to spoil the dinner. In a story set in 1997, the last earthbound member of a Hale-Bopp suicide cult reconsiders her final act. After being accused of sexual harassment, a sharp-witted but naïve teenager discovers a surprising truth about her teacher. In the title story, “Jane and the Whales,” Jane is on a quest to discover the meaning of her uncontrollable astral projections, which always lead her back to the same diminishing gay bar.

Violence, transmutation, log booms, tenderness, a game of Bat and Moth—all have a role to play in these wildly diverse stories. Many of Routley’s characters suffer loss, shame and guilt. But the promise of clarity comes only with doubt and that frightening unravelling of certainty.

Andrea Routley's work has appeared in numerous literary magazines, including the "Malahat Review" and "Room Magazine," and in 2008, she was shortlisted for the Rona Murray Prize for Literature. She is the founder and editor of "Plenitude Magazine," Canada?s queer literary magazine. She edited "Walk Myself Home: An Anthology to End Violence Against Women" (Caitlin Press, 2010), which continues to receive praise from magazines like "Bitch," "Herizons," "Prairie Fire" and the "Vancouver Sun." In 2012, she completed a degree in writing from the University of Victoria. She currently lives in Victoria, BC, with her girlfriend and their ferocious cat, Travis.

Praise For Jane and the Whales: Short Stories…

“Andrea Routley could grow into a fierce good writer, even a great one. Many of her stories tell us things we might not have known about the natural world. She has that unteachable instinct for the killer instant when a character peels back whatever has been obscuring the truth.” — Richard Cumyn, The Fiddlehead

“Routley’s perceptiveness of the subtle magic that underlies everyday life, and her ability to illuminate those subtleties to be fresh and yet instantly recognizable at once, is the standout strength of this collection. As Jane observes in the title story, ‘It is hard to see the mystical in something so familiar’—a fitting capstone for a collection that manages to achieve just that.” — Corinna Chong, The Malahat Review

“Routley brings together a collection of bizarre, wonderful and often dark short stories. Like a child standing at the edge of a dark forest, staring into the gloom, her stories confront the animal power within people and, at the same time, the cages we find ourselves living in … the finale of the collection is pure magic.” — Michael Lyons, Xtra West

“Many of the other stories in the collection, like ‘Habitat,’ focus on the areas of the world in which the wild presses up against the domestic, the natural world and its inhabitants getting cozy (be it in a tent or a vision, mysticism or imagination) …Ultimately the works are preoccupied with relationships, of all sorts and with a close-up view, also suggested by the striking cover image by Sandy Tweed. Whether from the perspective of teacher or student, guide or follower, the characters in Jane and the Whales sometimes reach out and sometimes retract, sometimes recoil and sometimes connect. It is a very satisfying debut.” — Buried in Print

“A powerful, promising debut … [Routley shares] an attention to the small, intimate, everyday details of life and a knack for authentic-feeling characters.” — Casey the Canadian Lesbrarian

“Routley [has a] skill for transporting you to a moment in time and making you experience it from the gut outwards.” — SkyLightTrain.com
or
Not Currently Available for Direct Purchase
Copyright © 2020 American Booksellers Association