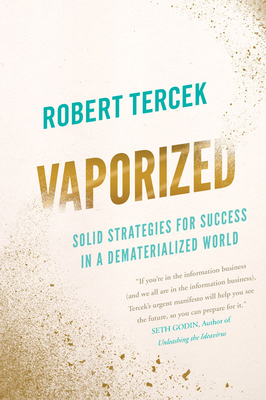 Solid Strategies for Success in a Dematerialized World

"If you're in the information business (and we all are in the information business), Tercek's urgent manifesto will help you see the future, so you can prepare for it." - Seth Godin Brace yourself for enormous changes ahead. Familiar fixtures of the economic landscape, including retail stores, physical products, corporations and even human workers, are about to be vaporized--replaced by digital information. A novel combination of new technologies-- mobile, cloud, crowd, artificial intelligence -- are reconfiguring every economic sector and industrial system on the planet. Even industries that were long considered immune to digital transformation are suddenly vulnerable to rapid dematerialization: now automobiles, hotels, health care, and higher education can be replaced by an app-enabled marketplace. The process of vaporization is relentless and all-pervasive. For consumers this change is as bewildering as it is exhilarating. For CEOs of old-school firms, the change is terrifying. But for startup Internet companies, it's the greatest landgrab since the Gold Rush. In Vaporized, innovation expert Robert Tercek shows us how this process works and takes us to the front line of digital transformation. Tercek provides an essential guide to this vaporized world, with proven strategies for those who want to master the process.

Robert Tercek is one of the world's most prolific creators of interactive content. He has created designed and created interactive experiences on every digital platform, including satellite television, game consoles, broadband Internet and mobile networks. In his 22-year career, Tercek has launched startup ventures and also served in executive leadership roles at major media companies, most recently as President of Digital Media at OWN: The Oprah Winfrey Network, and previously as Senior Vice President of Digital Media at Sony Pictures Entertainment and earlier as Creative Director at MTV: Music Television. His professional credits include several milestones: the launch of the first multi-channel television satellite in Asia, the first animated multimedia games for computers, the first Java-based multiplayer games on the Web, and the first streaming video on mobile devices. Tercek provides strategic insight and advice to many companies, including Nokia, Motorola, AMD, Sony Computer Entertainment, Turner Broadcasting, PBS, CNN, Interpublic Group, and Reed Exhibitions. He is the Chairman of the Board of Directors for the Creative Visions Foundation in Malibu, California. An advocate of the future of media and information technology, Mr Tercek is a highly in-demand keynote speaker. He has been a featured speaker at NAB, CES, GDC, CTIA, NATPE, MIPTV, MAPIC, E3 Expo, Sundance Film Festival, X Media Lab, the Austin Game Conference, 3GSM, KidScreen Summit, MIT's Future of Entertainment Summit, the World Technology Summit and many private corporate events. He lives in Los Angeles. Vaporized is his first book.
Loading...
or
Not Currently Available for Direct Purchase