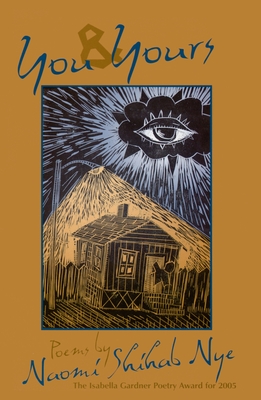 You and Yours (American Poets Continuum)

In You and Yours, Naomi Shihab Nye continues her conversation with ordinary people whose lives become, through her empathetic use of poetic language, extraordinary. Nye writes of local life in her inner-city Texas neighborhood, about rural schools and urban communities she's visited in this country, as well as the daily rituals of Jews and Palestinians who live in the war-torn Middle East.

I missed the day
on which it was said
others should not have
certain weapons, but we could.
Not only could, but should,
and do.
I missed that day.
Was I sleeping?
I might have been digging
in the yard,
doing something small and slow
as usual.
Or maybe I wasn't born yet.
What about all the other people
who aren't born?
Who will tell them?

Balancing direct language with a suggestive "aslantness," Nye probes the fragile connection between language and meaning. She never shies from the challenge of trying to name the mysterious logic of childhood or speak truth to power in the face of the horrors of war. She understands our lives are marked by tragedy, inequity, and misunderstanding, and that our best chance of surviving our losses and shortcomings is to maintain a heightened awareness of the sacred in all things.

Naomi Shihab Nye, poet, editor, anthologist, is a recipient of writing fellowships from the Lannan and Guggenheim foundations. Nye's work has been featured on PBS poetry specials including NOW with Bill Moyers, The Language of Life with Bill Moyers, and The United States of Poetry. She has traveled abroad as a visiting writer on three Arts America tours sponsored by the United States Information Agency. In 2001 she received a presidential appointment to the National Council of the National Endowment for the Humanities. She lives in San Antonio, Texas.

Naomi Shihab Nye, poet, essayist, anthologist, has been a recipient of writing fellowships from the Lannan Foundation, the Guggenheim Foundation and the Witter Bynner Foundation/Library of Congress. Author of more than twenty volumes, her recent books include Mint Snowball and 19 Varieties of Gazelle: Poems of the Middle East which was selected as a National Book Award finalist in 2002. Her books of poems include Fuel (BOA Editions) and Red Suitcase (BOA). Nye's work has been featured on the PBS poetry specials NOW with Bill Moyers, The Language of Life with Bill Moyers and The United States of Poetry . She has read her work on National Public Radio's Prairie Home Companion. Poetry editor for The Texas Observer, Nye has worked for as a visiting writer in schools at all educational levels. She lives in San Antonio, Texas.
Loading...
or support indie stores by buying on