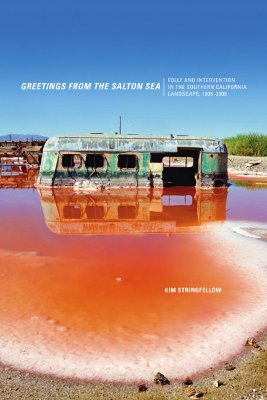 Greetings from the Salton Sea (Hardcover)

Folly and Intervention in the Southern California Landscape, 1905-2005

The Salton Sea is a man-made catastrophe, redolent with the smell of algae and decomposing fish. Nevertheless, the lake's vast, placid expanses continue to attract birdwatchers, tourists and artists. In "Greetings from the Salton Sea," photographer Kim Stringfellow explores the history of California's largest lake from its disastrous beginnings the "sea" was formed when Colorado River levees broke and spilled into a depression 280 feet below sea level to its heyday as a desert paradise in the 1950s and its current state as an environmental battleground.
Like the 400-plus species of birds that use the lake as a halfway point in their annual migration, developers flocked to the water too: they planted palm trees, built golf courses, and hired showstoppers such as the Beach Boys to perform at area resorts. These days, politicians seek to redirect the lake's only source of replenishment agricultural runoff from surrounding farms to water golf courses and green lawns elsewhere. "Greetings from the Salton Sea"'s photographs capture the war among policymakers, environmentalists, developers, and the individuals still living along the lake's shores. As Stringfellow aptly documents, it is a war for water and, ultimately, for existence.

Kim Stringfellow is an associate professor in the School of Art, Design, and Art History at San Diego State University. She is the author of "Jackrabbit Homestead Tracing the Small Tract Act in the Southern California Landscape, 1938 2008."

Praise For Greetings from the Salton Sea: Folly and Intervention in the Southern California Landscape, 1905-2005…

"The Salton Sea is one of the great conundrums for our time--a new place already in ruins, a toxic place that is also a wild bird refuge, a strange mix of debris and sublimity that Kim Stringfellow''s pictures and history portray compellingly." --Rebecca Solnit

“Kim Stringfellow’s odyssey into the Salton Sea excavates cultural relics and treasures that surprise and astound. She weaves the fragments, tatters, and shards that she found into a salty tale that makes one nostalgic for the Sea’s future, something that seems always around the bend.  She has added an eloquent new exhibit to this museum of decay.”—Matthew Coolidge, Director, Center for Land Use Interpretation

"Stringfellow''s images, taken alone, may be understated, but seen in numbers and backed by her crisply elucidating text, they make for quite a saga."--Los Angeles Times

"With a cover photograph drenched in radioactive colors and irony, this book rests in the hands like a live grenade. . . . a urgent but measured plea for the restoration of this unique ecosystem. . . . Stringfellow lets the tragic saga of Salton Sea speak for itself in brief chapters that unfold with a novelist''s flair and a scientist''s precision. . . . She also uses her camera to present eye-and-soul-searing evidence fo the raging environmental devastation. . . . She softens what could have been more shocking documentary photography by bathing sad surreal landscapes in the golden light and saturated colors of day''s end or its dawn. . . . Like her subject, which is but one of the countless environmental time bombs we face worldwide, Stringfellow''s photographs deserve a larger venue."--San Diego Union-Tribune
-Ann Jarmusch

"You rarely escape a sense of nature’s vast, incalculable richness or of photography’s ability to do it justice. . . . Offers an exploration of the colorful past and precarious present of the man-made playground and disaster that is the Salton Sea in Southern California."—Roberta Smith, New York Times
-Roberta Smith

"[This] striking, smartly designed book is full of vibrant photos that will help transport readers to this otherworldly place, where rust-stained marshes, boarded-up hotels and mounds of rotting fish and algae bare witness to humankind''s folly."