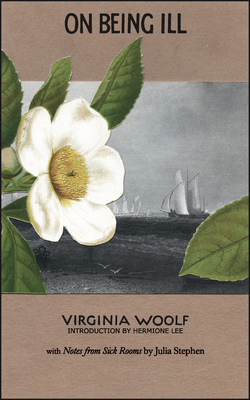 With Notes from Sick Rooms by Julia Stephen

This new publication of On Being Ill with Notes from Sick Rooms presents Virginia Woolf and her mother Julia Stephen in textual conversation for the first time in literary history. In the poignant and humorous essay On Being Ill, Virginia Woolf observes that though illness is a part of every human being's experience, it is not celebrated as a subject of great literature in the way that love and war are embraced by writers and readers. We must, Woolf says, invent a new language to describe pain. Illness, she observes, enhances our perceptions and reduces self-consciousness; it is "the great confessional." Woolf discusses the taboos associated with illness and she explores how it changes our relationship to the world around us. Notes from Sick Rooms addresses illness from the caregiver's perspective. With clarity, humor, and pathos, Julia Stephen offers concrete and useful information to caregivers today. Originally published by Paris Press in 2002 as On Being Ill, this paperback edition includes an introduction to Notes from Sick Rooms and to Julia Stephen by Mark Hussey, the founding editor of Woolf Studies Annual, and a poignant afterword by Rita Charon, MD, the founder of the field of Narrative Medicine. Hermione Lee's brilliant introduction to On Being Ill is a superb introduction to Virginia Woolf's life and writing. This book is embraced by the general public, the literary world, and the medical world.

Virginia Woolf (1882-1941) is one of the great literary geniuses of the twentieth century. Her innovative fiction and essays are revered by readers around the globe. She was a central member of the Bloomsbury group and a ground-breaking feminist, publishing book-length essays that continue to change the lives of women today. Her novels include To the Lighthouse, Mrs. Dalloway, The Waves, and Orlando: A Biography. When she was not writing, Virginia Woolf operated Hogarth Press with her husband Leonard Woolf. She typeset the original Hogarth Press publication of On Being Ill. Throughout much of her life, Woolf faced the challenges of illness, yet she continued to create revolutionary works of literature. Julia Stephen (1846-1895), Virginia Woolf's mother, grew up in England among the painters and poets, novelists and philosophers who frequented the homes of her uncle Henry Thoby Prinsep and her aunt Julia Margaret Cameron, the acclaimed photographer. Her first husband, Herbert Duckworth, died in 1870. She married Woolf's father, Leslie Stephen, in 1878. Julia Stephen worked as a vocational nurse throughout her adult life, and published Notes from Sick Rooms in 1883.
or support indie stores by buying on