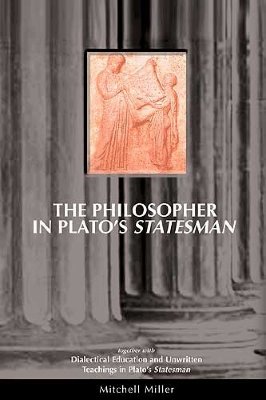 The Philosopher in Plato's Statesman

Together with "Dialectical Education and Unwritten Teachings in Plato's Statesman"

In the "Statesman," Plato brings together--only to challenge and displace--his own crowning contributions to philosophical method, political theory, and drama. In his 1980 study, reprinted here, Mitchell Miller employs literary theory and conceptual analysis to expose the philosophical, political, and pedagogical conflict that is the underlying context of the dialogue, revealing that its chaotic variety of movements is actually a carefully harmonized act of realizing the mean. The original study left one question outstanding: what specifically, in the metaphysical order of things, motivated the nameless Visitor from Elea to abandon bifurcation for his consummating non-bifurcatory division of fifteen kinds at the end of the dialogue? Miller addressed in a separate essay, first published in 1999 and reprinted here. In it, he opens the horizon of interpretation to include the new metaphysics of the" Parmenides," the "Philebus," and the "unwritten teachings."
"This study demonstrates how the "Statesman" is the culminating expression of Plato's lifelong effort, both in Athens and in the Academy, to bring metaphysical insight to the unending political crisis of his times."The Philosopher in Plato's Statesman a trail-blazing work. While not every reader will agree with the lessons Miller himself draws from this approach, none should fail to be impressed by its interpretive power. All this is exciting stuff. The interpretive pathway on which Miller has embarked has the potential for changing the face of scholarship on the late Platonic dialogues. Parmenides Publishing] is to be commended for making these two important contributions available under a single cover." --"Kenneth Sayre, Professor of Philosophy, University of Notre Dame"
"Miller casts considerable light on virtually every aspect of the dialogue. . . . All in all, this book is an outstanding contribution to our understanding of the Statesman." --"Stanley Rosen, Borden Parker Bowne Professor of Philosophy, Boston University"

MITCHELL MILLER is Professor of Philosophy at Vassar College. He is the author of "Plato's "Parmenides.