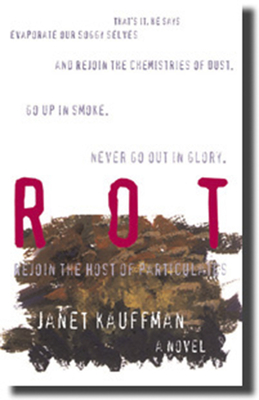 This is a story that tracks a father whose wish is to die in the open, open to the elements. He’s a Mennonite, a pacifist, obsessed with Stalin and other tyrants, and he’s determined to redefine power, rethink what it is to be good. With his daughter, and with his friend Irene, he finds collaborators in his passion for trespass. This book has moments where the writing is both beautiful and grotesque: fitting, as the book itself tackles the fantastic contradictions of the human experience. Janet Kauffman writes with a clarity of voice that cuts clean through the brush of language but leaves no trail we couldn’t turn back even if we wanted to.

JANET KAUFFMAN was born in Lancaster, Pennsylvania, and raised on a tobacco farm. She has published several collections of short stories, including Characters on the Loose (Graywolf Press), Obscene Gestures for Women (Alfred A. Knopf), and Places in the World a Woman Could Walk (Alfred A. Knopf). Her short novels, Collaborators (Alfred A. Knopf), The Body in Four Parts (Graywolf Press), and this book, Rot, complete the trilogy Flesh Made Word. She teaches creative writing at Eastern Michigan University.
Loading...
or
Not Currently Available for Direct Purchase