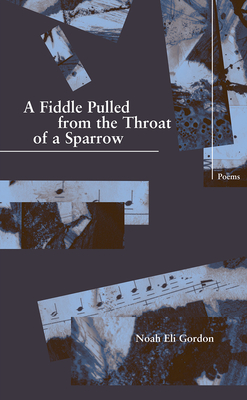 A Fiddle Pulled from the Throat of a Sparrow

” . . . the 33 archly titled poems and sequences in Gordon’s fourth collection attempt to assemble, sometimes like a computer running a poetic algorithm, a hallowed new world flush in art and music. Written with exactness (sonnet sequences, a series of seven line poems, anaphora, etc.), the pieces are thickly smattered with the bedrock and easy emotion of the deep image, the hipster-abstract, and bible-ese: ‘the sound of smoke // was that of expansion // but the breaking of bread // like a dusk-shadow // became a name // losing itself in echo.'”
––Publishers Weekly

NOAH ELI GORDON is the author of eight books, including The Year of the Rooster (Ahsahta Press, 2013), The Source (Futurepoem, 2011), and Novel Pictorial Noise (Harper Perennial, 2007), which was selected by John Ashbery for the National Poetry Series and subsequently chosen for the San Francisco State Poetry Center Book Award. Gordon is the co-publisher of Letter Machine Editions, an editor with The Volta, and an Assistant Professor in the MFA program in Creative Writing at The University of Colorado–Boulder, where he currently directs Subito Press.
Loading...
or
Not Currently Available for Direct Purchase