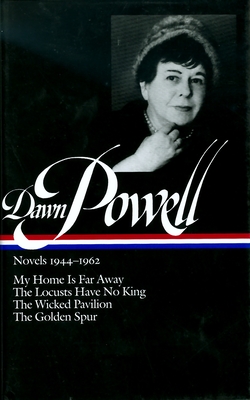 American literature has known few writers capable of the comic élan and full-bodied portraiture that abound in the novels of Dawn Powell. Yet for decades after her death, Powell’s work was out of print, cherished by a small band of admirers. Only recently has there been a rediscovery of the writer Gore Vidal calls “our best comic novelist,” and whom Edmund Wilson considered to be “on a level with Anthony Powell, Evelyn Waugh, and Muriel Spark.” In this, one of two volumes collecting nine novels, The Library of America presents the best of Powell’s quirky, often hilarious, sometimes deeply moving fiction.

My Home Is Far Away (1944), the last of Powell’s novels set in Ohio, is a fictionalized memoir of Powell’s difficult childhood. With The Locusts Have No King (1948), the story of a scholar’s unexpected brush with the temptations of celebrity and riches, Powell resumed her lifelong dissection of New York’s pretensions and glamour. The first of three brilliant postwar satires, it was followed by The Wicked Pavilion (1954), a novel that lays bare its characters’ illusions about love and success against the backdrop of the Café Julien, a relic of a bygone era in the history of Greenwich Village. The volume concludes with Powell’s final novel, The Golden Spur (1962), in which she drew on her time spent among painters at the famed Cedar Tavern for an affectionate if pointed satire on Manhattan’s art world.

Dawn Powell’s New York novels are exactly what she wanted them to be: “crystal in quality, sharp as the skyline, and relentlessly true.”

Dawn Powell (1896-1965), the author of numerous novels, plays, and story collections, was a vital part of the pre- and postwar Greenwich Village literary scene.
or support indie stores by buying on