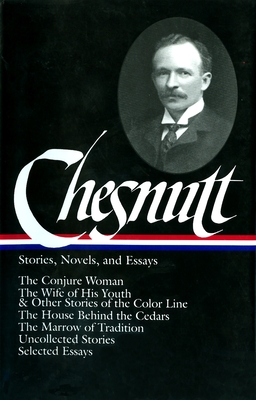 Stories, Novels, and Essays (LOA #131): The Conjure Woman / The Wife of His Youth & Other Stories of the Color Line / The House Behind the Cedars / The Marrow of Tradition / uncollected stories /

Rejecting his era's genteel hypocrisy about miscegenation, lynching, and "passing," Charles W. Chesnutt broke new ground in American literature with his innovative explorations of racial identity and use of African-American speech and folklore. Chesnutt exposed the deformed logic of the Jim Crow system-creating, in the process, the modern African-American novel. Here is the best of Chesnutt's fiction and nonfiction in the largest and most comprehensive edition ever published, featuring a newly researched chronology of the writer's life.

The Conjure Woman (1899) introduced Chesnutt to the public as a writer of "conjure" tales, stories that explore black folklore and supernaturalism. That same year, he published The Wife of His Youth, and Other Stories of the Color Line, stories set in Chesnutt's native North Carolina that dramatize the legacies of slavery and Reconstruction at the turn of the century. His first novel, The House Behind the Cedars (1900), is a study of racial passing. The Marrow of Tradition (1901), Chesnutt's masterpiece, is a powerful and bitter novel about the harsh reassertion of white dominance in a southern town at the end of the Reconstruction era.

Nine uncollected short stories round out the volume's fiction, including conjure tales omitted from The Conjure Woman and two stories that are unavailable in any other edition. Eight essays highlight his prescient views on the paradoxes of race relations in America and the definition of race itself.

Charles Waddell Chesnutt (1858-1932) was America's first great black novelist, the author of such groundbreaking works as The Conjure Woman, The Wife of His Youth and Other Stories of the Color-Line, and The House Behind the Cedars.
Loading...
or
Not Currently Available for Direct Purchase