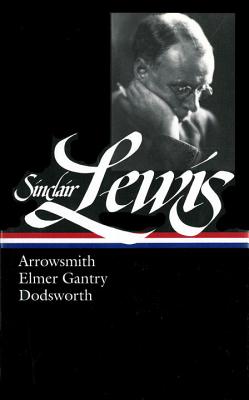 Written at the height of his powers, the three novels included in this Library of America volume continue the vigorous unmasking of the pretenses and hypocrisies of American middle-class life that Sinclair Lewis began in Main Street and Babbitt. The social sweep and descriptive power of Lewis’s fiction earned him international recognition as a chronicler of his times, and in 1930 he was awarded the Nobel Prize in Literature, the first American thus honored.

In Arrowsmith (1925), Lewis portrays the medical education and career of Martin Arrowsmith, a physician who finds his commitment to the ideals of his profession tested by the greed and opportunism he encounters in private practice, public health work, and scientific research. The novel reaches its climax as its hero faces his greatest medical and moral challenges amid a deadly outbreak of plague on a Caribbean island. Arrowsmith was awarded the Pulitzer Prize, which Lewis refused to accept.

Elmer Gantry (1927) aroused intense controversy with its brutal depiction of a hypocritical preacher in relentless pursuit of worldly pleasure and power. Through his satiric examination of evangelical religion, Lewis captures the growing cultural and political tension during the 1920s between the forces of secularism and fundamentalism. Gantry, with his glib eloquence and behind-the-scenes self-indulgence, has become an archetypal figure in American culture.

Dodsworth (1929) follows Sam Dodsworth, a wealthy retired Midwestern automobile manufacturer, as he travels through England, France, Germany, and Italy with his increasingly restless wife, Fran. The novel intimately explores the unraveling of their marriage while pitting the proud heritage of European high culture against the rude strength of ascendant American commercialism.

Sinclair Lewis was born in 1885 in Sauk Centre, Minnesota, and graduated from Yale University in 1908. His college career was interrupted by various part-time occupations, including a period working at the Helicon Home Colony, Upton Sinclair’s socialist experiment in New Jersey. He worked for some years as a free lance editor and journalist, during which time he published several minor novels. But with the publication of Main Street (1920), which sold half a million copies, he achieved wide recognition. This was followed by the two novels considered by many to be his finest, Babbitt (1922) and Arrowsmith (1925), which was awarded the Pulitzer Prize in 1926, but declined by Lewis. In 1930, following Elmer Gantry (1927) and Dodsworth (1929), Sinclair Lewis became the first American author to be awarded the Nobel Prize for distinction in world literature. This was the apogee of his literary career, and in the period from Ann Vickers (1933) to the posthumously published World So Wide (1951) Lewis wrote ten novels that reveal the progressive decline of his creative powers. From Main Street to Stockholm, a collection of his letters, was published in 1952, and The Man from Main Street, a collection of essays, in 1953. During his last years Sinclair Lewis wandered extensively in Europe, and after his death in Rome in 1951 his ashes were returned to his birthplace.
Loading...
or
Not Currently Available for Direct Purchase