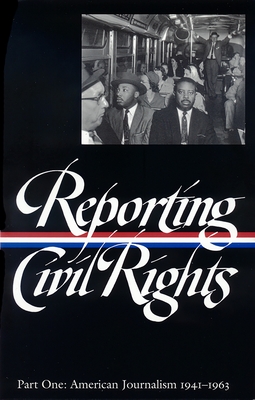 First published for the fortieth anniversary of the March on Washington, this Library of America volume along with its companion chronicles over thirty tumultuous years in the struggle of African-Americans for freedom and equal rights.

The first volume follows the rise of the modern civil rights movement from A. Philip Randolph’s defiant 1941 call for a protest march on Washington to the summer of 1963 and the eve of the march that finally shook the nation’s conscience. Ralph Ellison, Langston Hughes, Pauli Murray, and Bayard Rustin record the growing determination of African-Americans in the 1940s to oppose racial injustice; Murray Kempton and William Bradford Huie report on the lynching of Emmett Till; Ted Poston offers an inside look at the courage and resourcefulness of the Montgomery bus boycotters; Relman Morin in Little Rock and John Steinbeck in New Orleans witness the terrors of mob rage; David Halberstam and Louis Lomax describe the wildfire spread of the sit-in movement; James Baldwin investigates the Nation of Islam.

Robert Penn Warren’s “Segregation,” a Southern moderate’s soul-searching interrogation of the traditions of his native region, is included in its entirety, as is Martin Luther King, Jr.’s classic defense of civil disobedience, “Letter from Birmingham Jail.” Remarkable but little-known reporters from the African-American press, among them James Hicks of the Amsterdam News, George Collins of the Baltimore Afro-American, L. O. Swingler of the Atlanta Daily World, and Trezzvant Anderson of the Pittsburgh Courier, are reprinted here for the first time, along with astonishing eyewitness accounts of movement activism by Fannie Lou Hamer, Tom Hayden, and Howard Zinn.