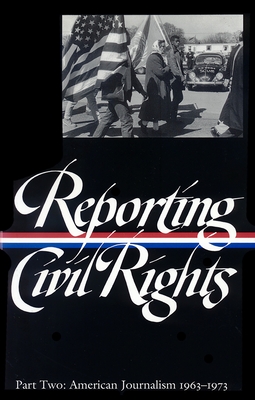 This Library of America volume, along with its companion, offers a uniquely panoramic perspective of the fight to bring an end to racial segregation in the United States. It gathers the work of over 150 diverse writers, representing the best in American journalism.

This second volume charts the movement’s course from the historic 1963 March on Washington through the violence of the late 1960s to the complex reflections of the early 1970s. Karl Fleming and James D. Williams report on the murder of four young girls in the Birmingham church bombing; John Hersey and Alice Lake bear witness to Mississippi’s “Freedom Summer”; Andrew Kopkind, Elizabeth Hardwick, and Renata Adler offer impressions of the Selma-to-Montgomery March; Robert Richardson, Jimmy Breslin, and Bob Clark capture the chaos of the Watts and Detroit riots.

At the 1966 Meredith March, Paul Good observes the tension emerging between believers in non-violent resistance and advocates of the new Black Power. Gordon Parks responds to the assassination of Malcolm X; Joan Didion, Gilbert Moore, and Nora Sayre evoke the phenomenon of the Black Panthers. Earl Caldwell, the only reporter present, describes King’s assassination, while Garry Wills and Pat Waters detail its traumatic aftermath. Willie Morris and Marshall Frady look at integration in the new South, while Tom Wolfe caustically explores new forms of racial confrontation and Richard Margolis depicts the emergence of a new consciousness among African-American college students.