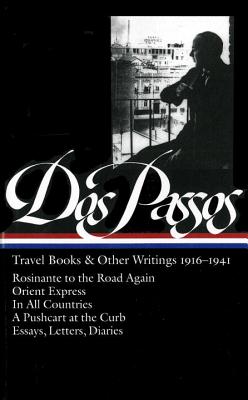 Travel Books & Other Writings 1916-1941 (LOA #143): Rosinante to the Road Again / Orient Express / In All Countries / A Pushcart at the Curb / essays, letters, diaries (Library of America John Dos Passos Edition #3)

During the years of his emergence as a major American novelist, John Dos Passos traveled widely in Europe, the Middle East, Mexico, and the United States, witnessing many of the tumultuous political, social, and cultural events of the early twentieth century and recording his changing response to them. This Library of America volume collects the vibrant and insightful travel books and essays he wrote at the same time he was publishing his fictional masterpieces Three Soldiers, Manhattan Transfer, and U.S.A.

Rosinante to the Road Again (1922) is a vivid collection of essays on Spanish life, literature, and art that demonstrates Dos Passos’s enduring fascination with a country he would repeatedly visit and write about. Orient Express (1927) records his 1921–1922 journey through the Middle East, and contains provocative and haunting descriptions of the effects of the Greek-Turkish War; the Caucasus in the aftermath of Soviet conquest; Persia during the rise of Reza Khan; the creation of Iraq by the British; and a winter trip by camel caravan across the desert from Baghdad to Damascus. In All Countries (1934) collects pieces on Russia in the late 1920s, Mexico in the aftermath of Zapata, the troubled Spanish Republic, and strikes and protests in the United States, while articles that appeared in Journeys Between Wars (1938) examine France under the Popular Front and the Spanish Civil War.

Also included are A Pushcart at the Curb (1922), a cycle of poems inspired by his travels; nine political and literary essays written between 1916 and 1941, including his denunciation of the execution of his friend José Robles by Spanish Communists; and a selection of letters and diary entries from 1916 to 1920 that record his wartime service as an ambulance driver in France and Italy. Plus 8 full-color plates of watercolors by Dos Passos.

“Dos Passos was an intrepid globe-trotter. . . . The travel book that is likely to trigger the greatest interest now is Orient Express, the story of his remarkable 1921–22 journey to Russia and the Middle East, which included three miserable weeks in Baghdad. He observed the creation of Iraq by the British, and wrote about Islamic fundamentalism, Babylon, and living in desert terrain.” —The New York Times

Townsend Ludington, volume editor, is Cary C. Boshamer Professor of English and American Studies at the University of North Carolina and author of John Dos Passos: A Twentieth Century Odyssey.
Loading...
or
Not Currently Available for Direct Purchase