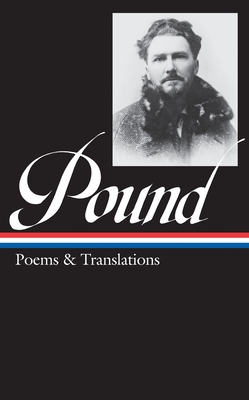 Here in one volume is the biggest and best collection of Pound’s poetry (excepting his long poem The Cantos) and translations ever assembled.

Ranging from the text of the handmade first collection Hilda’s Book (a gift to the poet H.D.) to his late translations of Horace, and containing dozens of items previously unavailable, Poems and Translations reveals the diversity and richness of a body of work marked by daring invention and resonant music.

In such early volumes as Ripostes, Cathay, Lustra, and Hugh Selwyn Mauberley—as surely as in his later magisterial versions of The Confucian Odes and the Sophoclean dramas Women of Trachis and Elektra—Pound followed his own directive to “make it new,” opening fresh formal pathways while exploring the most ancient traditions. Before, during, and after the controversies and catastrophes of his public career (culminating in his long residence in a Washington mental hospital while under indictment for treason), Pound remained capable of rare technical brilliance and indelible lyricism.

Here are the lush early lyrics, echoing Browning and the Troubadours; the chiseled free verse of such masterpieces as “The Return,” “Near Perigord,” and “Homage to Sextus Propertius”; the dazzling translations that led Eliot to call Pound “the inventor of Chinese poetry for our time.” The Chinese verse translations are supplemented by Pound’s versions of the Confucian prose texts—The Analects, The Great Digest, and The Unwobbling Pivot—which he saw as crucial to his literary aims. An extensive chronology offers guidance to Pound’s tumultuous life, and detailed notes clarify the many recondite allusions.

American poet and critic Ezra Pound (1885-1972) was one of the pioneering figures of American modernism.

Richard Sieburth, editor, is professor of French and Comparative Literature at New York University and the author of Instigations: Ezra Pound and Remy de Gourmont and editor of Pound’s A Walking Tour in Southern France.
Loading...
or
Not Currently Available for Direct Purchase