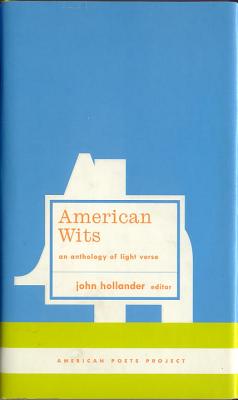 Irreverent, playful, and inventive, the American light verse of the past century offers a brimming feast of urbane pleasures. Bubbling over with engaging parodies, sparkling aphorisms, and wisecracking asides, the poems gathered here display a sure-footed handling of the poet’s art. The foremost practitioners of light verse “took delight not only in what they had to say but in their precise manner of saying it,” writes John Hollander in his introduction. “What makes it mean something is . . . the unique pleasure that poets and readers alike can take in that craft.”

The poets in this volume included journalists, playwrights, screenwriters, and also some of the greatest poets of the century. We have Frost, Eliot, Millay, and Cummings, Don Marquis’ free-verse tales of Archy and Mehitabel, Newman Levy’s comic twists on grand opera, Samuel Hoffenstein’s disenchanted parsing of romantic sentiment, Dorothy Parker’s bitter epigrams, Ogden Nash’s brilliantly funny exercises in irregular meter: all are among the highlights from a century’s worth of poetic humor.

“The still-glimmering stars of light verse include Dorothy Parker, of course, who breaks your heart as well as your sobriety with her wit and acerbity; the nonpareil Ogden Nash; and Phyllis McGinley. But opera-flouting Norman Levy, love-deflating Samuel Hoffenstein, poetic chestnut-parodying Morris Bishop—these and other now-obscure names demand to be lit anew, to be read.” —Booklist (starred review)
or
Not Currently Available for Direct Purchase
Copyright © 2020 American Booksellers Association