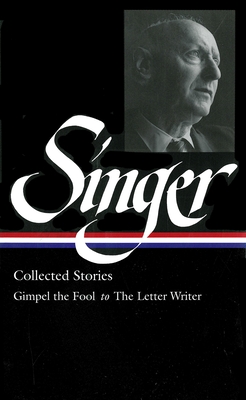 Beginning with “Gimpel the Fool,” the story that brought Isaac Bashevis Singer to prominence in America in the 1950s, this Library of America volume is the first of three gathering most of Singer’s short fiction. These stories were published in English in the versions he called his “second originals,” translations that he supervised and on which he himself often collaborated, revising his Yiddish texts as he worked.

Born in 1904 into a family of rabbis, Singer grew up in a devout household in Warsaw’s Jewish quarter, but he also spent time in the villages and market towns of eastern Poland, most notably Bilgoray, where he took refuge with his mother and brother during World War I. He had firsthand exposure to forms of Jewish folk culture that were destroyed by the Nazis, and many of his works testify to the richness of that annihilated world. In his stories set in Poland, Singer drew upon vernacular traditions for tales imbued with a wild, sometimes mischievous, often disturbing supernaturalism that was an outgrowth of local storytelling but containing dark undercurrents born of his own concerns and obsessions. At the same time, his skeptical but never dismissive engagement with religion and spirituality—and the opposing forces of secularism—enabled him to take part in the creative ferment of Jewish modernism but also distance himself from its politics and literary methods.

In addition to “Gimpel the Fool,” this volume—drawn from Singer’s first four English-language collections of stories originally published in the 1950s and 1960s—contains some of Singer’s most beloved tales: “The Spinoza of Market Street,” “The Gentleman from Cracow,” “Taibele and Her Demon,” and “Yentl the Yeshiva Boy,” the basis of a hit Broadway play and the film Yentl.

Isaac Bashevis Singer emigrated to New York from Poland in 1935 and found work with the Jewish Daily Forward. Author of many novels, collections of short stories, and books for children, he was awarded the Nobel Prize in Literature in 1978.
Ilan Stavans is Lewis-Sebring Professor in Latin American and Latino Culture at Amherst College and the author or editor of numerous books.
Loading...
or support indie stores by buying on
(This book is on backorder)