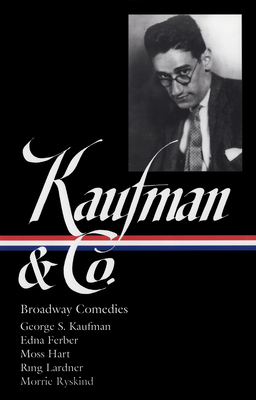 Broadway Comedies (LOA #152): The Royal Family / Animal Crackers / June Moon / Once in a Lifetime / Of Thee I Sing / You Can't Take It with You / Dinner at Eight / Stage Door / The Man Who

If Eugene O’Neill represents the tragic mask of American drama, then George S. Kaufman can easily lay claim to its smiling counterpart. No other comic dramatist in America has enjoyed more popular success and perennial influence or been more fortunate in his choice of collaborators, who included George and Ira Gershwin, Moss Hart, Irving Berlin, and the Marx Brothers.

Here, in the most comprehensive collection of his plays ever assembled, are nine classics: his uproarious “backstage” play The Royal Family (1927, written with Edna Ferber); the Marx Brothers–inspired mayhem of Animal Crackers (1928, with Morrie Ryskind), in a version discovered in Groucho Marx’s papers and published here for the first time; June Moon (1929, with Ring Lardner), a hilarious look at a young composer trying to make it big on Tin Pan Alley; Once in a Lifetime (1930, with Moss Hart), one of the first and best satires of Hollywood; Pulitzer Prize winners Of Thee I Sing(1931, with Morrie Ryskind and Ira Gershwin) and You Can’t Take It with You (1936, with Moss Hart); Dinner at Eight(1932, with Edna Ferber), a tart ensemble piece that mixes comedy and melodrama; Stage Door (1936, with Edna Ferber), his much-loved story about young actresses trying to make it big in New York City; and The Man Who Came to Dinner (1939, with Moss Hart), an unforgettable burlesque of America’s cult of celebrity.

Bursting with vernacular wit, farcical ingenuity, and theatrical panache, these plays have remained beloved favorites and exuberant reminders of Broadway in its glory days.

“The best anthology of American plays that anyone’s put out in years.” — Boston Phoenix

Laurence Maslon, editor, is an associate arts professor at NYU’s Tisch School of the Arts and a former associate artistic director at Arena Stage in Washington, D.C. He was senior consultant and co-writer for two episodes of the six-part PBS series Broadway: The American Musical, as well as coauthoring, with Michael Kantor, the companion volume for the documentary.
Loading...
or
Not Currently Available for Direct Purchase