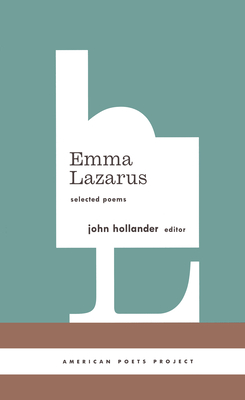 The first important American Jewish poet, Emma Lazarus is remembered above all for her classic sonnet “The New Colossus,” whose phrases (“Give me your tired, your poor.”) have become part of the American language. In this new selection of Lazarus’s work, John Hollander demonstrates that in her relatively brief life she achieved real poetic mastery in a variety of modes.

In early poems like “Phantasies” and “Symphonic Studies,” she explored fluently imagined inner landscapes suggested by the music of Schumann. Later, her deepening interest in Jewish history and culture was expressed in such powerful poems as “1492,” “The New Ezekiel,” and “The Guardian of the Red Disk.” Influenced both by American models, among them her poetic mentor Emerson, and by the poets whose work she translated, including Heinrich Heine and the medieval Hebrew poets Solomon Ibn Gabirol and Judah ha-Levi, she forged a poetic style of high technical accomplishment and moral passion.

Long neglected, her work is revealed in this volume as an important contribution to American poetry.

John Hollander (1929–2013) published nearly two dozen books of poetry, including Selected Poetry (1993), Figurehead(1999), and  A Draft of Light (2008), as well as five books of criticism. He received the Bollingen Prize and a MacArthur Fellowship, and was a Sterling Professor Emeritus of English at Yale University.
or
Not Currently Available for Direct Purchase
Copyright © 2020 American Booksellers Association