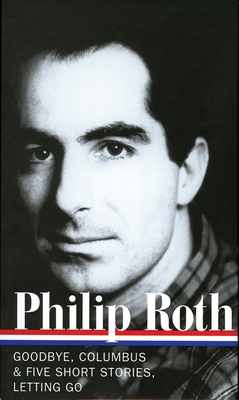 For the last half century, the novels of Philip Roth have re-energized American fiction and redefined its possibilities. Roth’s comic genius, his imaginative daring, his courage in exploring uncomfortable truths, and his assault on political, cultural, and sexual orthodoxies have made him one of the essential writers of our time. By special arrangement with the author, The Library of America now inaugurates the definitive edition of Roth’s collected works. This first volume presents Goodbye, Columbus and Five Short Stories, the book that established Roth’s reputation on publication in 1959 and for which he won the National Book Award, and his first novel, Letting Go (1962).

The title novella, Goodbye, Columbus, the story of a summer romance between a poor young man from Newark and a rich Radcliffe co-ed, is both a tightly wrought tale of youthful desire and a satiric gem that takes aim at the comfortable affluence of the postwar boom. Here and in the stories that accompany it, including “The Conversion of the Jews” and “Defender of the Faith,” Roth depicts Jewish lives in 1950s America with an unflinching sharpness of observation.

In Letting Go, a sprawling novel set largely against the backdrop of Chicago in the 1950s, Roth portrays the moral dilemmas of young people cast precipitously into adulthood, and in the process describes a skein of social and family responsibilities as they are brought into focus by issues of marriage, abortion, adoption, friendship, and career. The novel’s expansiveness provides a wide scope for Roth’s gift for vivid characterization, and in his protagonist Gabe Wallach he creates a nuanced portrait of a responsive young academic whose sense of morality draws him into the ordeals of others with unforeseen consequences.

Philip Roth, acclaimed author of Portnoy's Complaint, The Human Stain and many other works of fiction, is the recipient of numerous awards, including the National Medal of Arts from the White House.
or
Buy Here
Copyright © 2020 American Booksellers Association