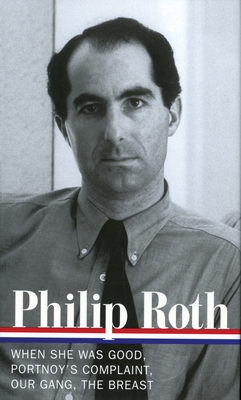 In this, the second volume of The Library of America’s definitive edition of the collected works of Philip Roth, published by special arrangement with the author, the range and inventiveness of Roth’s fiction is dazzlingly displayed in four extraordinarily diverse works.

When She Was Good (1967) is the trenchant portrait of Lucy Nelson, a young midwestern woman whose perception of her own suffering turns her into a ferocious force, “enemy-ridden and unforgivingly defiant,” as Roth would later describe her. A small-town 1940s America of restrictive social pressures and foreclosed opportunities provides the novel’s background.

The publication of the hilarious Portnoy’s Complaint (1969) was a cultural event that turned Roth into a reluctant celebrity. The confession of a bewildered psychoanalytic patient thrust through life by his unappeasable sexuality yet held back by the iron grip of his unforgettable childhood, Portnoy unleashed Roth’s comic virtuosity and opened new avenues for American fiction.

In Our Gang (1971), described by Anthony Burgess as a “brilliant satire in the real Swift tradition,” Roth effects a savage takedown of the administration of Richard Nixon (who figures here as Trick E. Dixon). Written before the revelations of the Watergate scandal, Our Gang continues to resonate as a broad and outraged response to the clownish hypocrisy and moral theatrics of the American political scene.

The Kafkaesque excursion The Breast (1972) introduces David Kepesh in the first volume of a trilogy that continues with The Professor of Desire (1977) and The Dying Animal (2001). The Breast prompted Cynthia Ozick to remark, “One knows when one is reading something that will permanently enter the culture.”

Philip Roth, acclaimed author of Portnoy's Complaint, The Human Stain and many other works of fiction, is the recipient of numerous awards, including the National Medal of Arts from the White House.
Loading...
or support indie stores by buying on