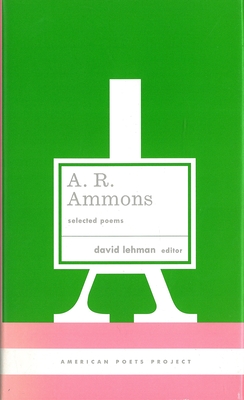 Meditative, comic, emotionally wrenching, steeped in both the natural world and the life of the mind, the poetry of A. R. Ammons is at once cosmic in scope and intimate in its moment-to-moment transformations. With his mastery of description and cadence, his roiling wit and fearless gaze, Ammons was a philosopher of the everyday who found surprise everywhere he looked. “He is often witty, sometimes bawdy,” writes editor David Lehman, “on a perpetual quest to find forms capacious enough for an imagination intent on finding a place for everything.”

A compound, in editor David Lehman’s words, of “wisdom, pathos, humor, mortal longing, and intimations of immortality,” the work of A. R. Ammons is like nothing else in modern American poetry. Ammons’s tireless formal invention and restless curiosity about every aspect of nature and of the mind are embodied in poetry that is effortlessly accessible and generous in its impulses. Whether spreading out in the long forms of Tape for the Turn of the Year or Garbage, or honing his perceptions down to the extreme brevity of his shorter lyrics, he holds tight to his vision of the way “all day / life itself is bending, / weaving, changing, / adapting, failing, / succeeding.”

This new selection covering the whole range of Ammons’s career offers a superb introduction to the pleasures and surprises of his work. His uncanny ability to balance wide-ranging abstract speculation with meticulous observation of natural phenomena, in poetry that encompasses moods of tragic pathos, low comedy, and seemingly casual profundity marks him as one of the preeminent figures in our recent literature.

“Ammons (1926–2001) was a difficult figure to pin down. While unassociated with any particular poetic school or group, he picked up threads from Whitman, Williams, Frost and Stevens, weaving them into poetry all his own: equal parts pastoral meditation, philosophical speculation and homespun resignation. In the process, he won nearly every honor a major American poet can. Now, in the first selection to present samplings from the whole of his oeuvre (which ranges from two-line lyrics to book-length sequences), we can survey the extent is his poetic powers.” —Publishers Weekly

Archie Randolph Ammons (1926-2001) twice won the National Book Award for poetry in a career that extended over five decades and more than two dozen published works.

David Lehman has been the series editor of The Best American Poetry since its creation in 1988. His books of poetry include New and Selected Poems, When a Woman Loves a Man, and The Daily Mirror. He teaches in the New School graduate writing program in New York City.
Loading...
or
Not Currently Available for Direct Purchase