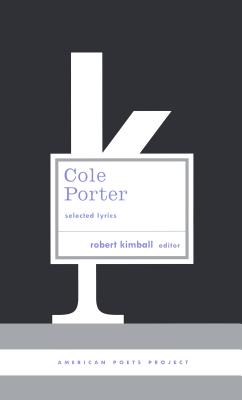 Cole Porter possessed to a singular degree the art of expressing depth through apparent frivolity. The effervescent wit and technical bravura of his songs are matched by their unguarded revelations of feeling. In the words of editor Robert Kimball, “Porter wrote tellingly of the pain and evanescence of emotional relationships. He gently mocked propriety and said that few things were simple or lasting or free from ambiguity.” Of the masters of twentieth-century American songwriting, Porter was one of the few who wrote both music and lyrics, and, even in the absence of his melodies, his words distill an unmistakable mixture of poignancy and wit that marks him as a genius of light verse.

Selected from over eight hundred songs, here are Porter’s finest flights of invention, lyrics that are an indelible part of 20th-century culture: “Let’s Do It,” “Love for Sale,” “I Get a Kick Out of You,” “Anything Goes,” “In the Still of the Night,” “I Concentrate on You,” and dozens more.

“Any treasury of Porter’s classic ditties ought to be worth its weight in gilded wit, and this edition is no exception. It’s delightful, it’s delicious, it’s de-lovely. . . . His technical prowess as a versifier wasn’t just his best-kept secret—it was the secret weapon of his urbane charm.”—David Barber, The New York Times Book Review

Robert Kimball is a historian of the American musical theater whose books include The Gershwins (with Alfred Simon), Reminiscing with Sissle and Blake (with William Bolcom), Reading Lyrics (with Robert Gottlieb), and volumes devoted to the complete lyrics of Lorenz Hart, Ira Gershwin, Irving Berlin, and Frank Loesser. He is the longtime advisor to the Cole Porter Musical and Literary Property Trust, and the editor of several books on Cole Porter. He received a Drama Desk Award for his rediscovery of lost musical-theater manuscripts in a Secaucus, New Jersey warehouse.
Loading...
or
Not Currently Available for Direct Purchase