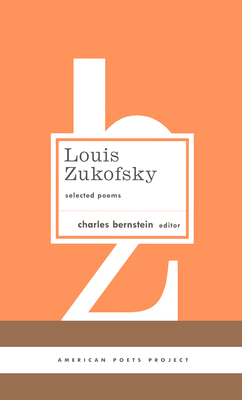 With an ear tuned to the most delicate musical effects, an eye for exact and heterogeneous details, and a mind bent on experiment, Louis Zukofsky was preeminent among the radical Objectivist poets of the 1930s. This is the first collection to draw on the full range of Zukofsky’s poetry——containing short lyrics, versions of Catullus, and generous selections from “A”, his 24-part “poem of a life”—and provides a superb introduction to a modern master of whom the critic Guy Davenport has written: “Every living American poet worth a hoot has stood aghast before the steel of his integrity.”

The most formally radical poet to emerge among the second wave of American modernists, Louis Zukofsky continues to influence younger poets attracted to the rigor, inventiveness, and formal clarity of his work. Born on New York’s Lower East Side in 1904 to emigrant parents, Zukofsky achieved early recognition when he edited an issue of Poetry devoted to the Objectivist poets, including George Oppen and Charles Reznikoff. In addition to an abundance of short lyrics and a sound-based version of the complete poems of Catullus, he worked for most of his adult life on the long poem “A” of which he said: “In a sense the poem is an autobiography: the words are my life.”

Zukofsky’s work has been described as difficult although he himself said: “I try to be as simple as possible.” In the words of editor Charles Bernstein, “This poetry leads with sound and you can never go wrong following the sound sense. . . . Zukofsky loved to create patterns, some of which are apparent and some of which operate subliminally. . . . Each word, like a stone dropped in a pond, creates a ripple around it. The intersecting ripples on the surface of the pond are the pattern of the poem.” Here for the first time is a selection designed to introduce the full range of Zukofsky’s extraordinary poetry.

Charles Bernstein is Regan Professor of English at the University of Pennsylvania. He is the author of over forty books including the essays collections, My Way: Speeches and Poems, A Poetics, and Content’s Dream: Essays 1975-1984 and the poetry collections With Strings, Republics of Reality: 1975-1995, and Dark City.

“Zukofsky is extraordinary reading, and perhaps because it is being published in the context of ‘American’ writers, the echoes of American literary history are difficult to evade.”—Rain Taxi
or
Not Currently Available for Direct Purchase
Copyright © 2020 American Booksellers Association