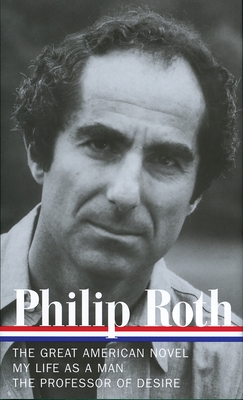 This third volume of The Library of America’s definitive edition of Philip Roth’s collected works presents three markedly different novels that together trace a crucial period in the bold evolution of one of America’s indispensable novelists.

In The Great American Novel (1973), a hilarious, bizarre, strangely poignant tall tale of American pieties and American lunacy, Roth lifts the lid on the suppressed history of the homeless Ruppert Mundys of baseball’s despised and vanquished third major league, turning the national pastime into unfettered picaresque farce. The cast of improbable characters includes: Gil Gamesh, the pitcher who actually tried to kill the umpire; John Baal, the ex-con first baseman, “The Babe Ruth of the Big House,” who never hit a home run sober; and the House Un-American Activities Committee.

My Life as a Man (1974) is Roth’s most blistering novel, the savage, sometimes lurid account of the all-out battle waged between the young writer Peter Tarnopol and the wife who is his nemesis, his demon, and his muse. This is the treacherous world of Strindberg nearly a century later: the story of a fierce marital tragedy of obsession and blindness and desperate need.

Philip Roth, acclaimed author of Portnoy's Complaint, The Human Stain and many other works of fiction, is the recipient of numerous awards, including the National Medal of Arts from the White House.
Loading...
or
Not Currently Available for Direct Purchase