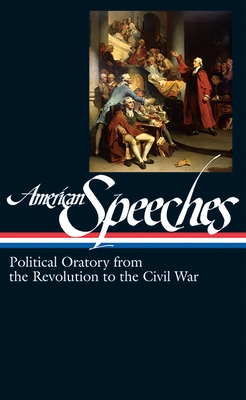 Political Oratory from the Revolution to the Civil War (Library of America: The American Speeches Collection #1)

Public speeches have profoundly shaped American history and culture, transforming not only our politics but also our language and our sense of national identity. This volume (the first of an unprecedented two-volume collection) gathers the unabridged texts of 45 eloquent and dramatic American speeches delivered by 32 American public figures between 1761 and 1865, beginning with James Otis’s denunciation of unrestrained searches by British customs officials—hailed by John Adams as the beginning of the American Revolution—and ending with Abraham Lincoln’s Second Inaugural Address. Rich in literary allusions, vivid imagery, and emotional appeals, political oratory flourished during this period in Congress and at campaign rallies, public meetings, and reform conventions, and reached a wider audience through newspapers and pamphlets.

Included are Patrick Henry’s “liberty or death” speech, George Washington’s appeal to mutinous army officers, and Henry Lee’s eulogy of Washington. Speeches by John Randolph and Henry Clay capture the political passions of the early republic, while three addresses by Daniel Webster—his first Bunker Hill oration, his second reply to Hayne, and his controversial endorsement of the Compromise of 1850—demonstrate the eloquence that made him the most renowned orator of his time.

Each volume contains biographical and explanatory notes, and an index.

“These speeches are part of our national heritage, just as much as our Constitution and the Bill of Rights. They should be studied and celebrated!” — President Bill Clinton