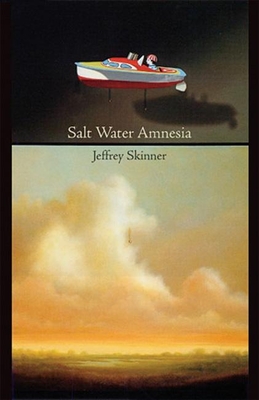 Jeffrey Skinner's poems come at the world from many different directions. Some are outrageous and very funny, like "Experiment," which begins, "I sewed my father into a specially designed, handmade bear suit. He was indistinguishable from a real bear, and yet retained the necessary functions of a human. I also provided a G.P.S. radio collar. Then I air-dropped him into a densely forested preserve. When I returned a year later I found he had mated with an Asian black bear. He and she and their two cubs lived a quiet life in a mountain cave." In other poems, Skinner explores more familiar domestic landscapes, taking us with great tenderness and precision into the life of the human heart. By turns poignant, brainy, and hilarious, Salt Water Amnesia is a book that will surprise and delight.

A calm water morning. After what was said on both sides.
Don't you talk to me that way. My daughter.
We cannot speak, now, nor stand to touch.

The bay, covered with tiny script
Moving rapidly right to left. Words
Crossing over
One another, whole passages
Torn from an asylum diary. I lifted her

Body, a huge flailing penknife, into the car.

A seagull sits bobbing on the text. My brother.
It appears that, today at least, all language moves out to sea.

Jeffrey Skinner has published four collections of poetry: Late Stars, A Guide to Forgetting, The Company of Heaven, and Gender Studies. His work has received wide recognition, including fellowships from the National Endowment for the Arts, the Ingram Merrill Foundation, and the Howard Foundation. Currently director of the creative writing program at the University of Louisville, he is also co-founder and editorial consultant for Sarabande Books.

Jeffrey Skinner, the current Director of the Creative Writing Program at the University of Louisville, has published four collections of poetry with Graywolf Press, University or Miami and University of Chicago. He's received fellowships from the National Endowment for the Arts, Ingram Merrill and Howard Foundations.
Loading...
or support indie stores by buying on