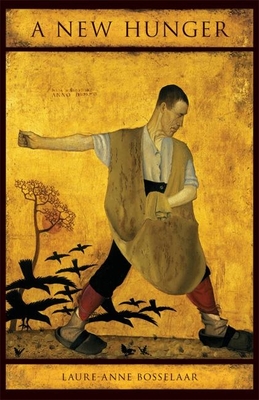 Beginning with a harrowing account of her childhood in a Belgian convent, where she was placed at the age of four, Laure-Anne Bosselaar shows us how early emotional and physical deprivation can be overcome by intelligence, humor, curiosity, and determination. Although many of her poems are overtly autobiographical, they are never merely personal.

Pulitzer Prize-winning poet Stephen Dunn wrote of A New Hunger: "There's a time in the life of a poet as a maker of poems, if she or he is going to become more than just good, when the voice of one's second self fully emerges, distilling and orchestrating the poet's concerns, while simultaneously infusing them with an inner melody--a music that reaches and satisfies both ear and mind. This is to say that Laure-Anne Bosselaar, with her wonderful third book, A New Hunger, has become more than just good. It's an occasion to mark and to celebrate."

The acclaimed author of two previous collections (The Hour Between Dog and Wolf and Small Gods of Grief, which won the 2001 Isabella Stewart Gardner Prize), Laure-Anne Bosselaar grew up in Belgium, where she worked as a talk show host, commentator, and voiceover for Belgian radio and television. Fluent in four languages, she moved to the United States in 1987.

Laure-Anne Bosselaar grew up in Belgium where she worked as a talk-show hostess, commentator and voice-over for Belgian Radio and TV. Fluent in four languages, she moved to the U.S. in 1987 and is the author of The Hour Between Dog and Wolf, and of Small Gods of Grief, which won the 2001 Isabella Gardner Prize.
Loading...
or support indie stores by buying on