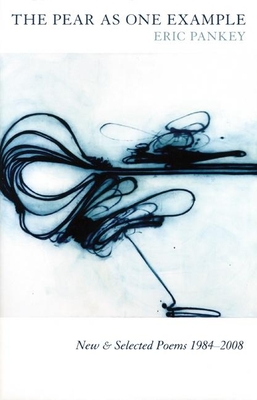 The Pear as One Example

Fans of an earlier generation of American poets, such as Elizabeth Bishop, A.R. Ammons, and Robert Bly, will find much to enjoy in this large volume of poetry that showcases an acute poetic prowess, capturing a range of heartfelt emotions and experiences. --NewPages

Allows readers to observe the nuances of style and thematic continuities within this atuhor's complex body of work... The poems within The Pear as One Example invoke barren landscapes and unremarkeable objects, rendering them a gem-like concentration of subjective concepts, which shine with 'arctic, oblique light' throughout. --Smartish Pace

This book off ers a generous selection from Eric Pankey's previous seven collections of poetry as well a book-length group of new poems.

For Pankey, language is a means of divination, of augury, of reading the world--the refracted past, the ephemeral present, and the mutable future. While these meditative poems are deeply philosophical, their subject is the world of things. In these poems, he explores the world by way of the body--the body as a marker of time, the body as a vessel of grief, the body as an ecstatic radiant filament. Like an alchemist, Pankey takes the elemental and transmutes it into the mythic.

At the center of many of these poems is a spiritual crisis. Pankey is like the man Flannery O'Connor describes in her essay, "Novelist and Believer," who "can neither believe nor contain himself in disbelief and who searches desperately, feeling about in all experience for the lost God." Each of these poems is a pilgrimage.

If Walt Whitman and Emily Dickinson are the strange, arranged marriage that gave rise to American poetry, Pankey is their off spring: at once expansive and concise, clear and hermetic, and visionary and mystic.

Born in Kansas City, Missouri, in 1959, Eric Pankey directed the MFA program at Washington University in St. Louis for many years. For the last decade, he has taught in the MFA program at George Mason University, where he is professor of English and the Heritage Chair in Writing. He lives in Fairfax, Virginia, with his wife and daughter.

Eric Pankey was educated at the University of Missouri and the University of Iowa. His awards include the Academy of American Poet's Walt Whitman Award, an Ingram Merrill Foundation grant, and a fellowship from the National Endowment for the Arts. He lives in Fairfax, VA, and teaches at George Mason University.
Loading...
or support indie stores by buying on