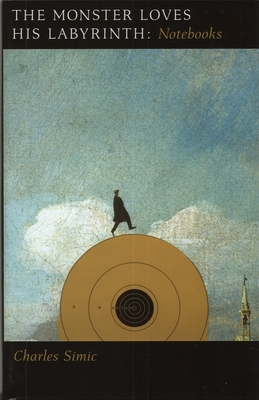 The Monster Loves His Labyrinth

"Nabokovian in his caustic charm and sexy intelligence, Simic perceives the mythic in the mundane and pinpoints the perpetual suffering that infuses human life with both agony and bliss. . . . And he is the master of juxtaposition, lining up the unlikeliest of pairings and contrasts as he explores the nexuses of madness and prophecy, hell and paradise, lust and death."--Donna Seaman, Booklist

As one reads the pithy, wise, occasionally cranky epigrams and vignettes that fill this volume, there is the definite sense that we are getting a rare glimpse into several decades worth of private journals--and, by extension are privy to the tickings of an accomplished and introspective literary mind.--Rain Taxi

Written over many years, this book is a collection of notebook entries by our current Poet Laureate.

Stupidity is the secret spice historians have difficulty identifying in this soup we keep slurping.

American identity is really about having many identities simultaneously. We came to America to escape our old identities, which the multiculturalists now wish to restore to us.

Ambiguity is the world's condition. Poetry flirts with ambiguity. As a "picture of reality" it is truer than any other. This doesn't mean that you're supposed to write poems no one understands.

The twelve girls in the gospel choir sang as if dogs were biting their asses.

What an outrage This very moment gone forever

Born in Yugoslavia in 1938, Professor Emeritus of Creative Writing at the University of NH, Charles Simic won the Pulitzer Prize for Poetry in 1990 and was a finalist for the National Book Award for Poetry in 1996 In 2007 he was appointed Poet Laureate and received the $100,000 Wallace Stevens Award from the Academy of American Poets.
Loading...
or support indie stores by buying on