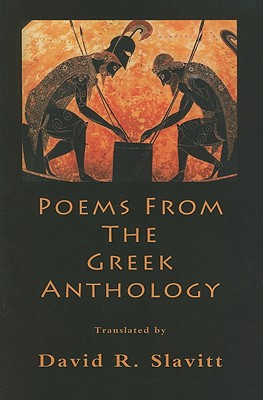 Poems from the Greek Anthology

The poet David R. Slavitt is one of the handful of great translators we have. He is certainly the most versatile. Now he has put himself to the beautiful labor of translating poems from the Greek Anthology. As is the case in all of his translations, the reader finds an absolute clarity of utterance as he moves from one great poet's voice to another's. What he has given us is a treasury of Greek poetry to be read again and again. Pure gold.

David R. Slavitt has also translated for Sheep Meadow Press the work of the Brazilian poet Manuel Bandeira, about which has been written, "There is something of the carnival in Bandeira's poetry, a wild celebration. . . . He is a poet of revelation, mystery and strangely ironic humor."

David R. Slavitt has translated Ovid, Virgil, Aeschylus, and Aristophanes, as well as works in French, Spanish, Portuguese, Italian and Hebrew. He is coeditor of the Johns Hopkins Complete Roman Drama in Translation series and the Penn Greek Drama series. His most recent works of his own poetry include The Seven Deadly Sins and Other Poems and Change of Address: Poems, New and Selected.
Loading...
or
Not Currently Available for Direct Purchase