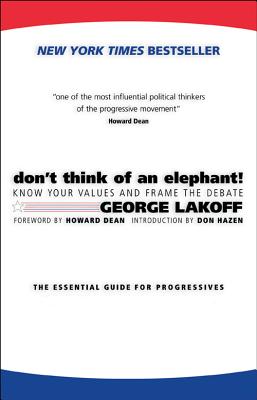 Don't Think of an Elephant!

Don't Think of an Elephant is the definitive handbook for understanding what happened in the 2004 election and communicating effectively about key issues facing America today. Author George Lakoff has become a key advisor to the Democratic party, helping them develop their message and frame the political debate.

In this book Lakoff explains how conservatives think, and how to counter their arguments. He outlines in detail the traditional American values that progressives hold, but are often unable to articulate. Lakoff also breaks down the ways in which conservatives have framed the issues, and provides examples of how progressives can reframe the debate.

Lakoff's years of research and work with environmental and political leaders have been distilled into this essential guide, which shows progressives how to think in terms of values instead of programs, and why people vote their values and identities, often against their best interests.

Don't Think of An Elephant is the antidote to the last forty years of conservative strategizing and the right wing's stranglehold on political dialogue in the United States.

George Lakoff is Richard and Rhoda Goldman Professor of Cognitive Science and Linguistics at the University of California, Berkeley, and is a founding senior fellow at the Rockridge Institute. He is one of the world's best-known linguists. His expertise is in cognitive linguistics, the scientific study of the nature of thought and its expression in language. Since the mid-1980s he has been applying cognitive linguistics to the study of politics, especially the framing of public political debate. He is the author of the influential book, Moral Politics: How Liberals and Conservatives Think (2nd edition, 2002) and Don't Think of an Elephant!: Know Your Values and Frame the Debate (2004). Since 2002, he has consulted with the leaders of hundreds of advocacy groups on framing issues, lectured to large audiences across the country, run dozens of workshops for activists, spoken regularly on radio talk shows and TV shows, spoken twice at the Democratic Senators' Policy Retreat, consulted with progressive pollsters and advertising agencies, been interviewed at length in the public media, served as a consultant in major political campaigns, and done extensive research for Rockridge. In addition to his work on political thought and language, he has been active in his academic discipline. He has lectured at major universities in dozens of countries around the world. He is currently on the Science Board of the Santa Fe Institute (1995-01), has served as President of the International Cognitive Linguistics Association and on the Governing Board of the Cognitive Science Society, and is co-director with Jerome Feldman of the Neural Theory of Language Project at the International Computer Science Institute at Berkeley. He is the author of Women, Fire, and Dangerous Things: What Categories Reveal About The Mind (1987) and co-author of Metaphors We Live By (1980; 2003) [with Mark Johnson], More Than Cool Reason (1989) [with Mark Turner], Philosophy in the Flesh: The Embodied Mind and Its Challenge To The Western Tradition (1999) [with Mark Johnson], and Where Mathematics Comes From: How the Embodied Mind Brings Mathematics Into Being (2000) [with Rafael Nunez].
Loading...
or
Not Currently Available for Direct Purchase