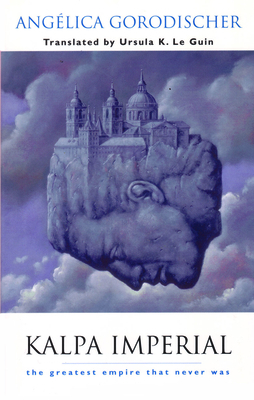 The Greatest Empire That Never Was

Ursula K. Le Guin chose to translate this novel which was on the New York Times Summer Reading list and winner of the Prix Imaginales, M's All , Poblet and Sigfrido Radaelli awards.

This
is the first of Argentinean writer Ang lica Gorodischer's award-winning
books to be translated into English. In eleven chapters, Kalpa Imperial's
multiple storytellers relate the story of a fabled nameless empire
which has risen and fallen innumerable times. Fairy tales, oral
histories and political commentaries are all woven tapestry-style into
Kalpa Imperial: beggars become emperors, democracies become
dictatorships, and history becomes legends and stories.

But this
is much more than a simple political allegory or fable. It is also a
celebration of the power of storytelling. Gorodischer and translator
Ursula K. Le Guin are a well-matched, sly and delightful team of
magician-storytellers. Rarely have author and translator been such an
effortless pairing. Kalpa Imperial is a powerful introduction to
the writing of Ang lica Gorodischer, a novel which will enthrall readers
already familiar with the worlds of Le Guin.