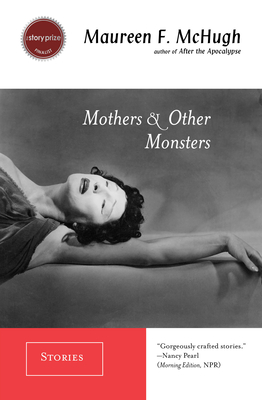 Nancy Pearl selected Mothers & Other Monsters as a Books for a Rainy Day on Morning Edition on NPR.

In her luminous, long-awaited debut collection, award-winning novelist Maureen F. McHugh wryly and delicately examines the impacts of social and technological shifts on families. Using beautiful, deceptively simple prose, she illuminates the relationship between parents and children and the expected and unexpected chasms that open between generations.

-- A woman introduces her new lover to her late brother.
-- A teenager is interviewed about her peer group's attitudes toward sex and baby boomers.
-- A missing stepson sets a marriage on edge.
-- Anthropologists visiting an isolated outpost mission are threatened by nomadic raiders. McHugh's characters--her Alzheimers-afflicted parents or her smart and rebellious teenagers--are always recognizable: stubborn, human, and heartbreakingly real. This new trade paperback edition has added material for book clubs and reading groups, including an interview with the author, book club questions and suggestions, and a reprint of Maureen's fabulous essay, The Evil Stepmother.

My favorite thing about her is the wry, uncanny tenderness of her stories. She has the astonishing ability to put her finger on the sweet spot right between comedy and tragedy, that pinpoint that makes you catch your breath. You're not sure whether to laugh out loud or cry, and you end up doing both at once.
--Dan Chaon

When I first read China Mountain Zhang many years ago, Maureen McHugh instantly became, as she has remained, one of my favorite writers. This collection is a welcome reminder of her power--they are resonant, wise, generous, sharp, transporting, and deeply, deeply moving. McHugh is enormously gifted; each of these stories is a gift.
--Karen Joy Fowler

Wonderfully unpredictable stories, from the very funny to the very grim, by one of our best and bravest imaginative writers.
--Ursula K. Le Guin

All the gorgeously crafted stories in Maureen McHugh's Mothers & Other Monsters have in common a profound understanding of the intricacies of human relationships, to which McHugh adds a touch of the fantastical. But here the fantastical seems so normal, so part of our everyday experience, that we simply accept McHugh's premises, odd as they might be when you consider them independently of the tales themselves. The adjective that best represents this collection is 'unsettling'. How else to describe stories in which a young woman meets a man she's attracted to at a dog obedience class and discovers that she dreads introducing him to her dead brother (In the Air); Ancestor Money, in which a bequest entices a woman to leave her comfortable home in the afterlife for a visit to China; or Laika Comes Back Safe, the story of two teenagers who are drawn together by the fact that both have unhappy home lives, but whose friendship is doomed because one is a werewolf. Whether it's alternative history that seems so real you start to question your own knowledge of the past (The Lincoln Train) or a tale of the horrifying end of a utopian colony (The Cost To Be Wise), McHugh shows that what many people might dismiss initially as genre fiction can become transcendent in the right hands.
I was so impressed by these stories that I immediately went back and read McHugh's first novel, China Mountain Zhang, which I had somehow missed, and enjoyed it thoroughly.
--Nancy Pearl (Book Lust) on Morning Edition, Books for a Rainy Day

McHugh is enormously talented.... She] has a light touch, a gentle sense of a humor, and a keen wit.
--Strange Horizons

There's not a single story that isn't strong, and most are brilliant.
--Ideomancer

Each story in this collection meditates in its own, odd way on the dynamics of families and the vagaries of being human. Ancestor Money considers the demands of the afterlife and the expectations of the living; The Lincoln Train describes an alternate ending to the U.S. Civil War, in which former slave owners are shipped westward on crowded trains. Nekropolis, the germ of McHugh's novel of the same title, gives a slightly different flavor to the origins of the story common to both versions. Other stories occur in settings closer to the known world and the tensions of families in it. In Eight-Legged Story, a stepmother comes to terms with being a replacement parent, and in Frankenstein's Daughter, a woman deals with the health problems of her daughter's clone, while her teenage son tries to show off to his friends by shoplifting. McHugh's stories are hauntingly beautiful, driven by the difficult circumstances of their characters' lives--slices of life well worth reading and rereading.
--Booklist

The 13 stories in McHugh's debut collection offer poignant and sometimes heartwrenching explorations of personal relationships and their transformative power. In Presence, a woman helps her husband through an experimental therapy for his Alzheimer's disease and, by the story's end, is less his spouse than a nurturing mother to his developing personality. In the Air bridges three generations with its account of the different emotions a woman wrestles with as she anxiously tracks her wandering senile mother and her rebellious teenage daughter by means of biologically implanted homing devices. Laika Comes Back Safe represents so believably the feelings two school friends share about their lives in dysfunctional families that the revelation that one occasionally transforms into a werewolf seems entirely within the realm of possibility. Whether writing an alternate Civil War history in The Lincoln Train or a tale of extraterrestrial anthropology in The Cost to Be Wise, McHugh (Nekropolis) relates her stories as slices of ordinary life whose simplicity masks an emotional intensity more often found in poetry. The universality of these tales should break them out to the wider audience they deserve.
--Publishers Weekly

In this collection of stories, Maureen F. McHugh explores the subject of technology and identity, demonstrating that technology can only be a lens for what defines us as human, that is, our intimate relationship with the world around us and all the beings with whom we share that world. It is not technology which transforms us into monsters, but the danger of losing our's.

Maureen F. McHugh has spent most of her life in Ohio, but has lived in New York City and, for a year, in Shijiazhuang, China. She is the author of four novels. Her first novel, China Mountain Zhang, won the Tiptree Award and her latest novel, Nekropolis, was a Book Sense 76 pick and New York Times Editor's Choice.
Loading...
or support indie stores by buying on